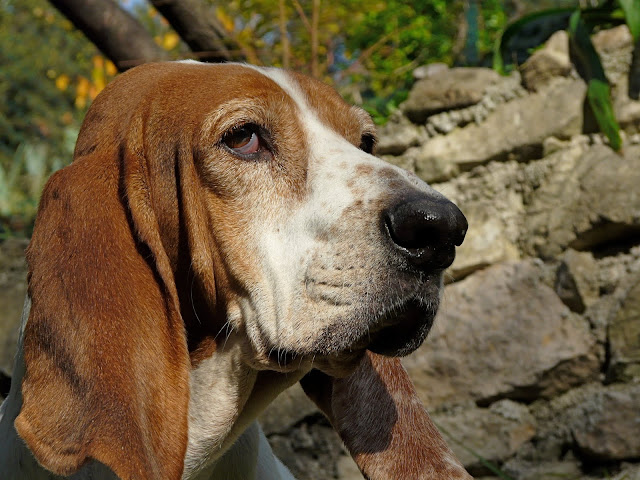 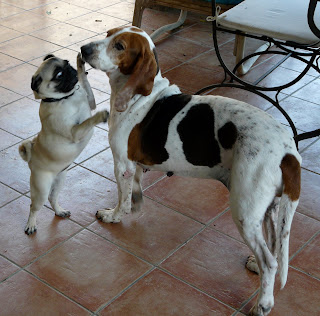 This is Mia. If you've read any of the Postcards from Pension Milou postings, you'll perhaps remember her story. She's a Bassett Ariégois, which is a French hunting dog - rather like a Bassett Hound with longer legs, don't you think? She appeared on this blog once before - the day she arrived which was the 31st December 2008.

So she's been living at Pension Milou for just over a year now - taken from a dreadful situation with her friend Mistral. They'd been shut up for eight years in a two-metre square run living on top of eight years of excrement. Sadly Mistral was to put to sleep after three months suffering from advanced cancer. Look at Mia now - she's come on a treat physically but is still terrified of people - it's getting a little better tho as time goes by. (in the photo with the pug she'd only been here 4 months. The other photos are recent.).

You can read more about Mia and also an update on Beau who recently had major surgery when his inner/middle ear was removed. Click on the Postcards link. It all ends well! 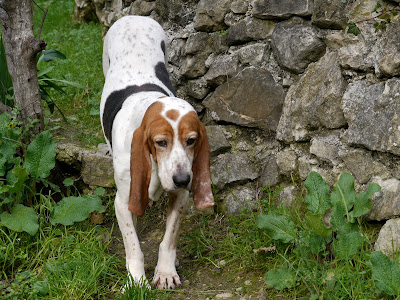 That knowing look says it all and must be all the thanks you need for your care and devotion, wonderful portrait.

That knowing look says it all and must be all the thanks you need for your care and devotion, wonderful portrait.

Bless you for all you've done for these animals.