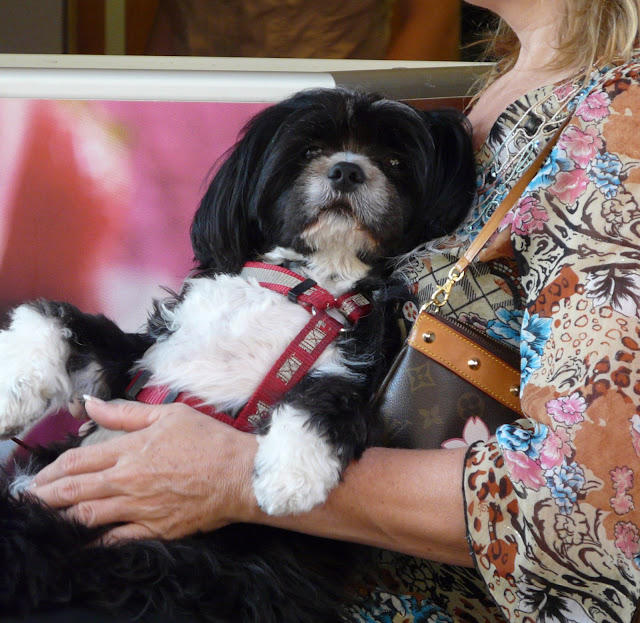 Some dogs have all the luck. Taken in the pedestrian street of Monaco.
Posted by Jilly at Friday, July 31, 2009 6 comments 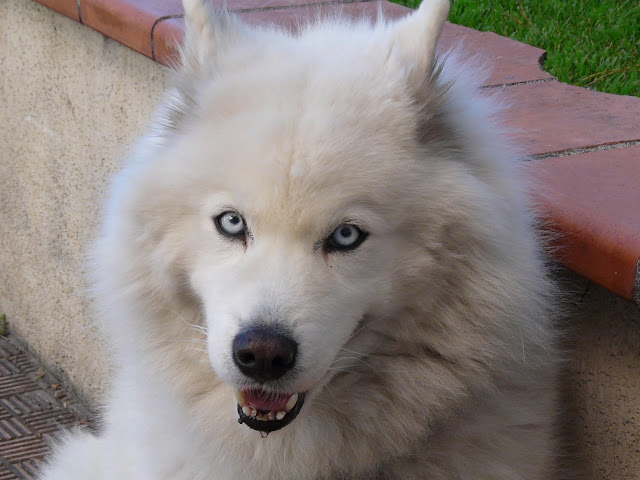 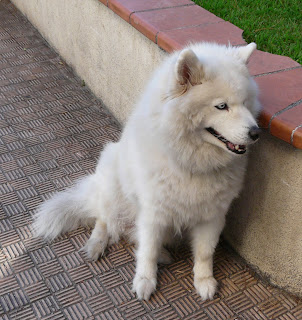 Ol' Blue Eyes - well yes, but not the Sinatra version. I was crossing a small square in Menton and this lovely Samoyed came up to smell me. If you have dogs, then other dogs find you incredibly interesting.

I don't know his or her name. He/she seemed to belong to a restaurant nearby. Eventually he gave up the sniffing and leaned against the wall. It was a hot, hot day. 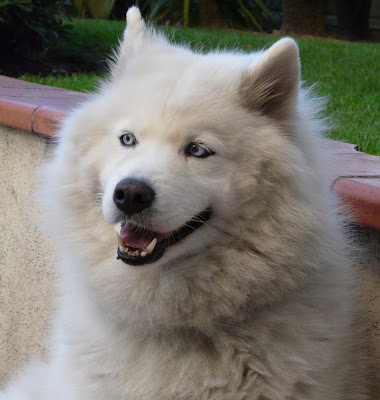 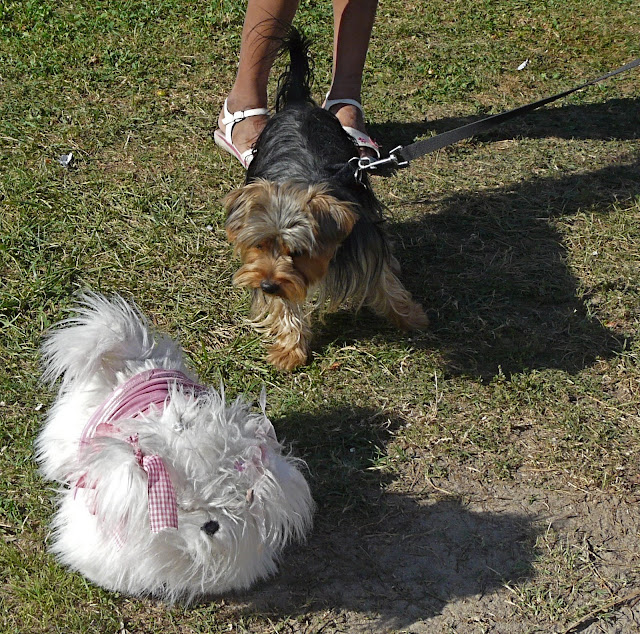 The Yorkie is in love! Perhaps someone should tell him the object of his desire is a battery operated toy.
Posted by Jilly at Thursday, July 23, 2009 4 comments

Dog Training - Charley in the Tube 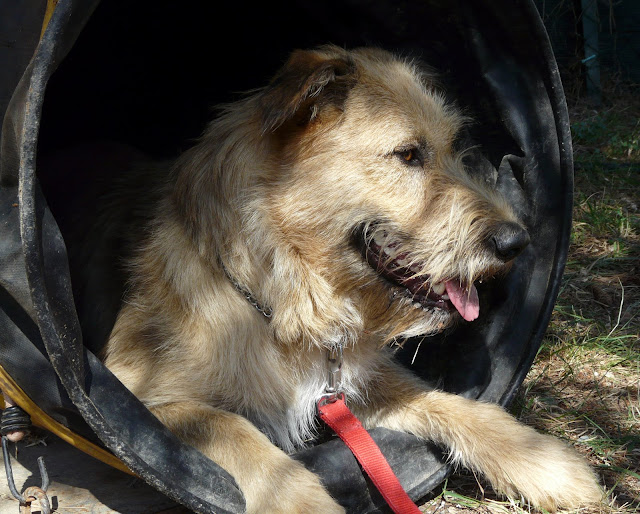 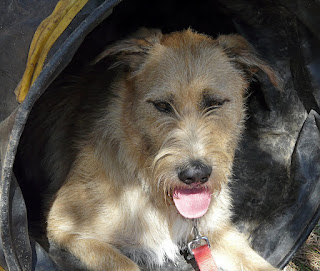 It's hot and Charley knows it will be cooler hiding in the Agility Tube. Charley is a Labrador/Griffon mix, 18 months old and lives in Roquebrune-Cap-Martin. 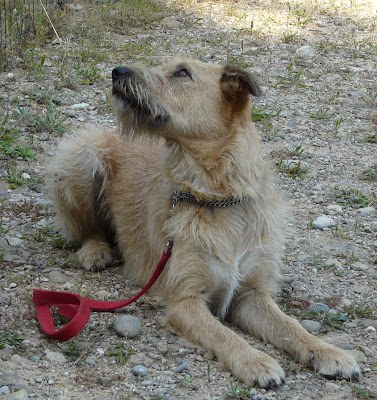 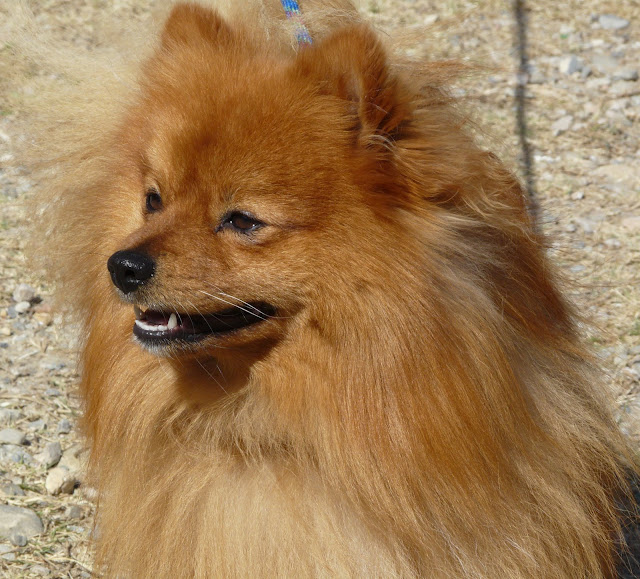 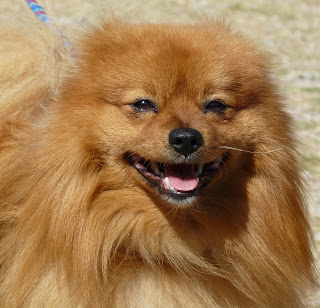 This adorable little Spitz looks in magnificent condition, doesn't he? Altaïr is 4 years old and lives in Contes, which is beyond Nice - he perhaps travelled the furthest to be at the Roquebrune Dog Training class.

I really should have asked owners to clean their dogs' eyes before I took the photographs. The sun was so bright I didn't notice until the pics came up on the screen and probably the sun made the dogs' eyes a bit runny.

We had to keep making noises to get him to put his ears up - you can see in the middle photo where they are not up. Too cute - wot no ears!

Note: I've changed his name in the heading as for some odd reason it has been bringing in tons of spam for weeks now. 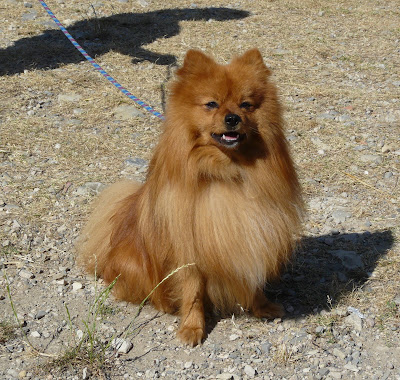 Capsule and Carnage - the Street Dogs who have been Stolen 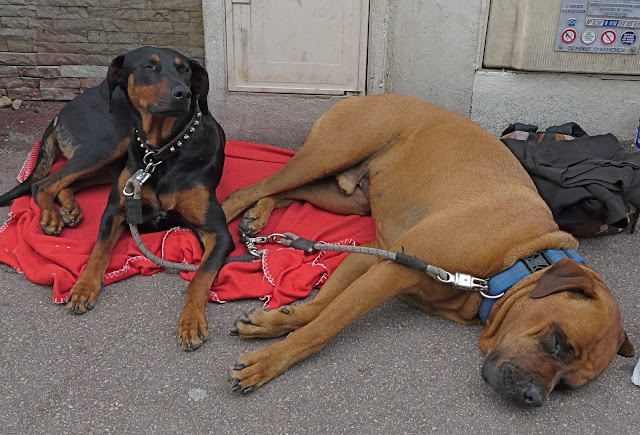 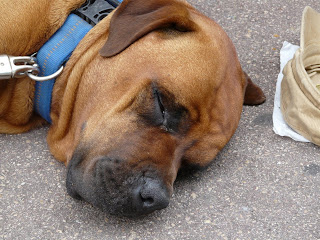 As is obvious, these are street dogs - meaning they belong to an 'sdf' (which stands for sans domicile fixe = no fixed abode) Unfortunately, since I met these dogs, they've been stolen. But let's start at the beginning....

I met them outside Marche U, a supermarket in Roquebrune. The one on the left is Capsule - she's a Dobermann crossed with a German Short-haired Pointer and she's 18 months old. She came from the refuge in Ventimiglia, just across the Italian border.

The big boy is Carnage and he's three and a half and he's a mix of a Dogue de Bordeaux and Bull Mastiff.

I took the photos on the 25th June and hadn't yet got around to putting them on Riviera Dogs but a couple of days ago had an email from a friend of the owner to say, they'd been stolen from him in Nice and could I send her the photographs to use in trying to get them back. 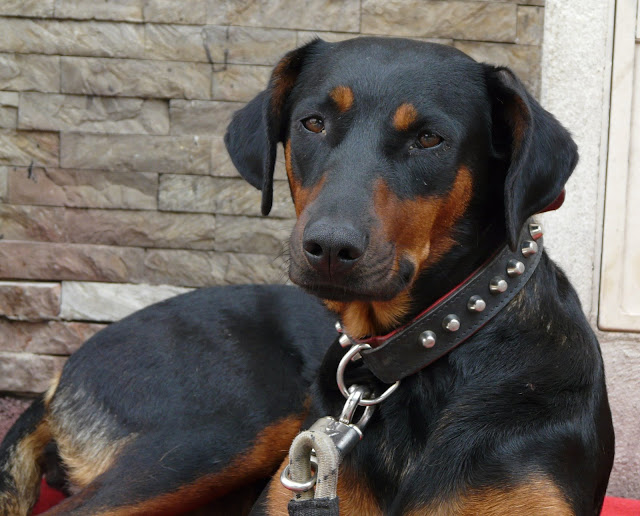 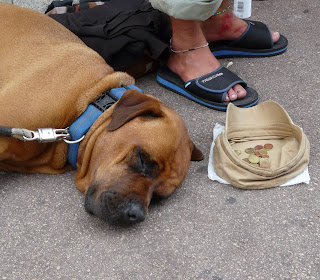 Some people I know won't be happy to see any dog living in the street but you can at least see they are not thin and have a blanket to sleep on. Are they happy? Well, I leave that up to you. At the moment, no one knows where they are. Let's hope they've been picked up by someone who will find them a good home. If I hear, I'll let you know. Probably they've been stolen by another 'sdf' as begging with dogs apparently brings better rewards.
Posted by Jilly at Thursday, July 16, 2009 5 comments

Dog Training - Chiva, the dog with the biggest grin 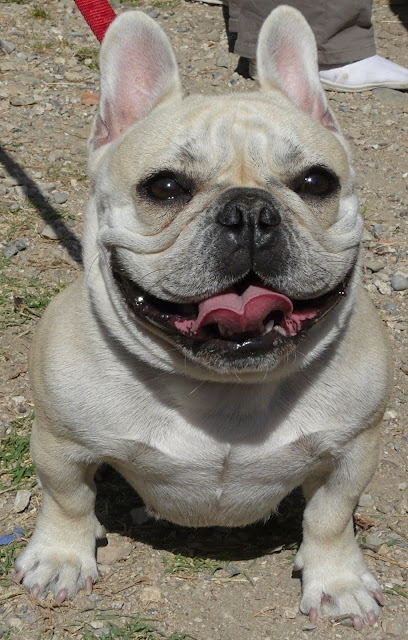 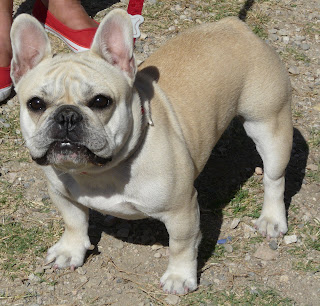 Isn't this the biggest grin you've ever seen?! Meet 2 year old Chiva, the French bulldog. She was late at Dog Training (don't think she minded) so she happily posed and made me laugh. Chiva lives in Beausoleil, which adjoins Monaco.
Posted by Jilly at Tuesday, July 14, 2009 10 comments 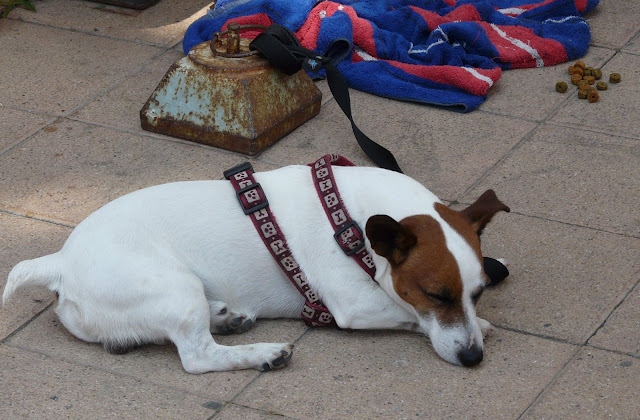 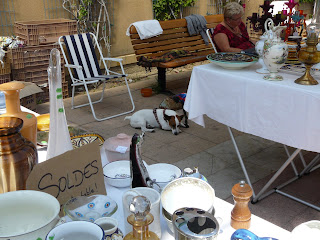 This little Jack Russell wants for nothing. Soft blanket, water bowl and a few croquettes spread around should he be hungry and best of all, his owner nearby. Far better than being left at home.

The Dog with the Plastic Bottle 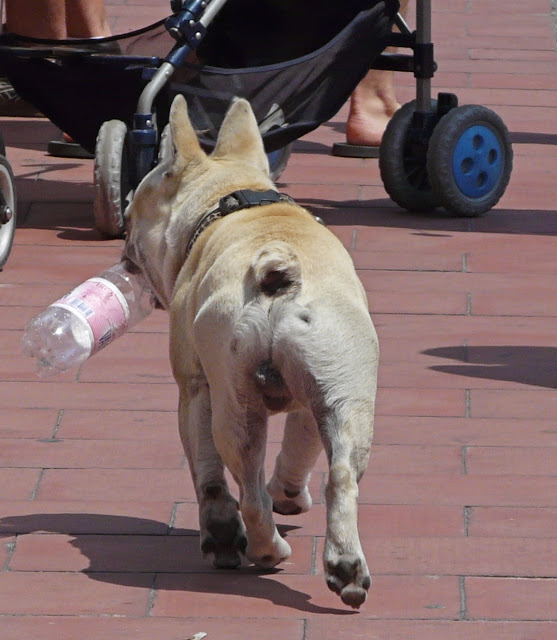 Well, it's not the greatest photo in the world but don't you just love this French bulldog with an empty water bottle in its mouth?

Apologies for lack of posts. I've had a lousy bout of bronchitis and it was as much as I could do to post my Menton and Monte Carlo blogs. Amazing how weak you get. Anyway antibiotics started yesterday and feeling much more human today.
Posted by Jilly at Friday, July 10, 2009 6 comments 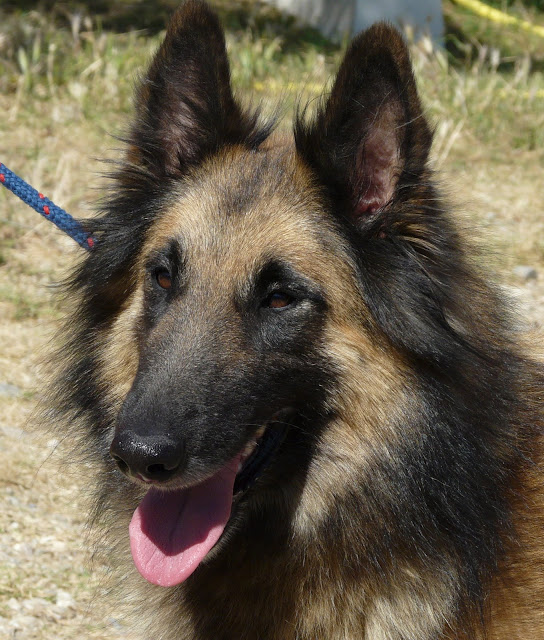 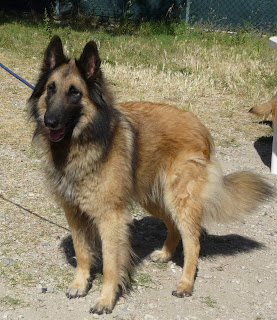 Auption is a three year old, owned by one of the ladies who trains the dogs. They live in Sospel, a hill village above Menton. There are several varieties of Belgian Shepherd Dog. Auption - look at those gentle eyes - is a Tervuren.
Posted by Jilly at Sunday, July 05, 2009 4 comments 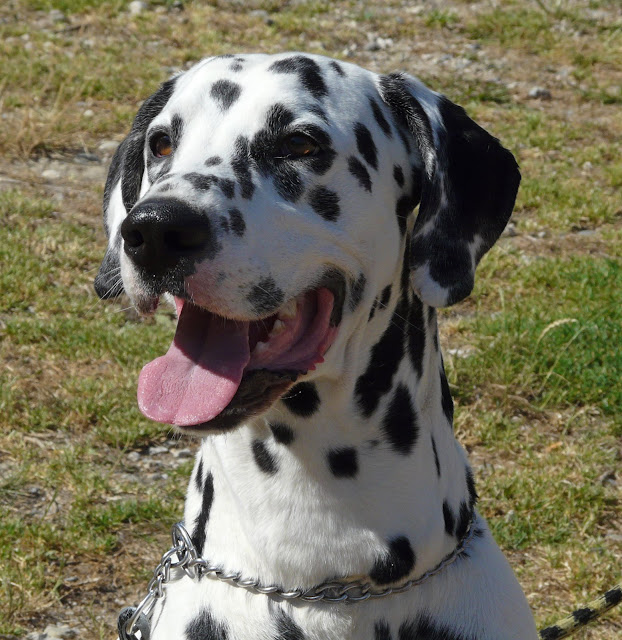 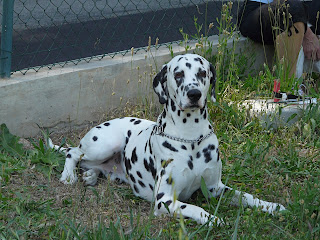 Brian lives in Cap d'ail, which adjoins the far side of Monaco. He's two years old and as you can see, is a beautiful Dalmatian.

In the middle photo, he is doing his sit/stay at the Dog Training class.

In the last photo, he's hot! 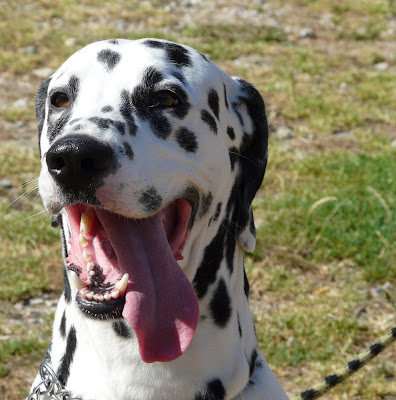