Cali at the Coiffeur 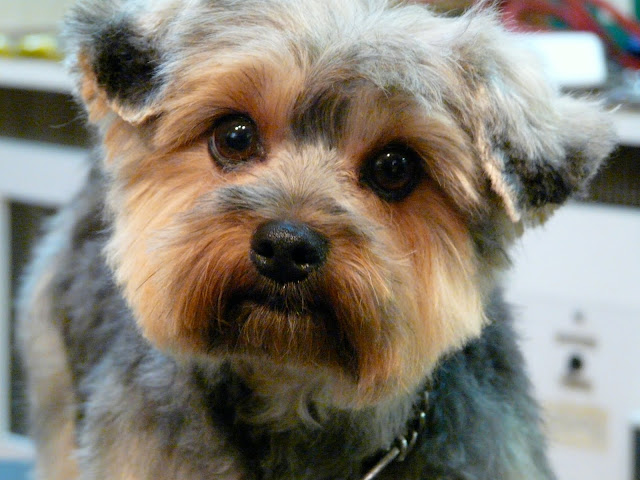 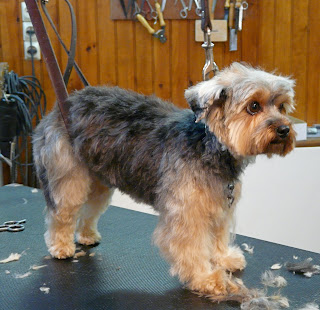 Oh - the indignity of it all! A strap under my nether regions...

This is little Cali, she's two years old and lives in Menton and is, as you see, getting a cut and blow dry at the Salon de Toilettage near to the market.
Posted by Jilly at Monday, November 30, 2009 4 comments 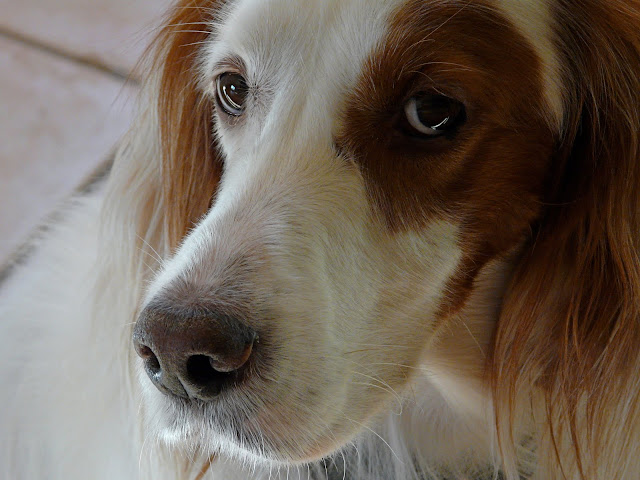 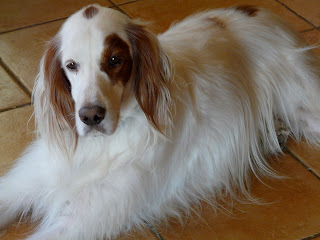 Setters always make me think of models or beautiful film stars and they always know they are beautiful too. Maggie is more than happy to pose, to show her profile and most of all, to look sad - when she's not!

Maggie is a 4 year old Red and White Irish setter who lives in Monaco. 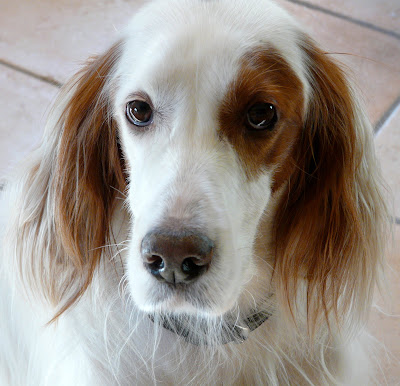 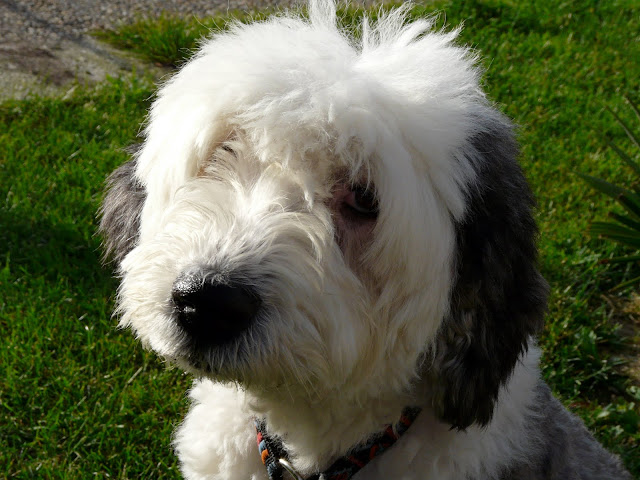 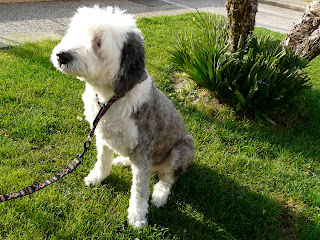 It's so unusual to see an Old English Sheepdog around here. Gorda is 10 years old and lives in Menton and so do I yet had never seen her before - or had I?

Gorda was born in Italy and lived there for much of her life. Now she lives with her owner's mother. She's got some spinal/incontinence problems that are mostly solved with medication.

Funnily enough years ago I used to look after an OES puppy called Gorda, who belonged to an Italian guy in Monte Carlo --- I wonder if it's the same Gorda? It was about eight or nine years ago so the timeline works. I wish I'd thought of it and asked. 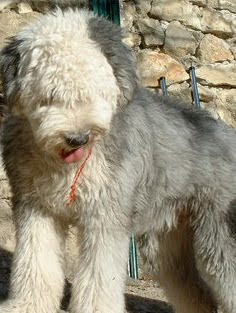 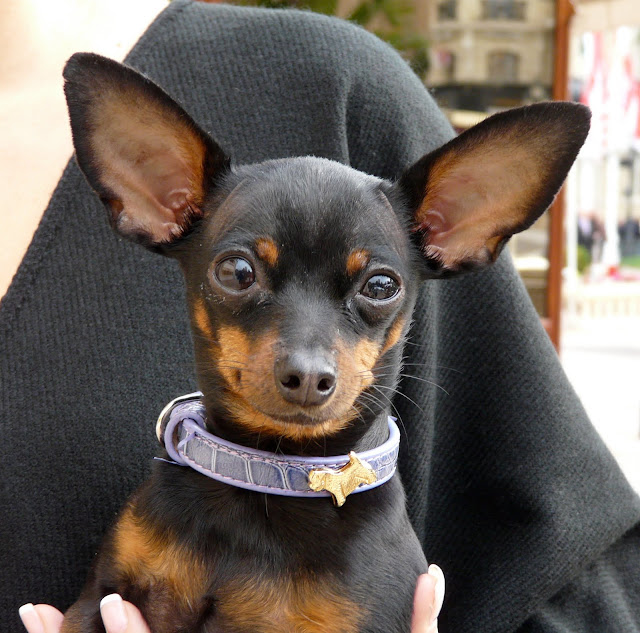 Seems to me that Min Pins are getting very à la mode lately - along with Yorkies and Chihuahuas.

The touch of red you glimpse in the background is from the flags on display throughout the Principality for Monaco's National Day. Click on the link to see more.
Posted by Jilly at Sunday, November 22, 2009 4 comments 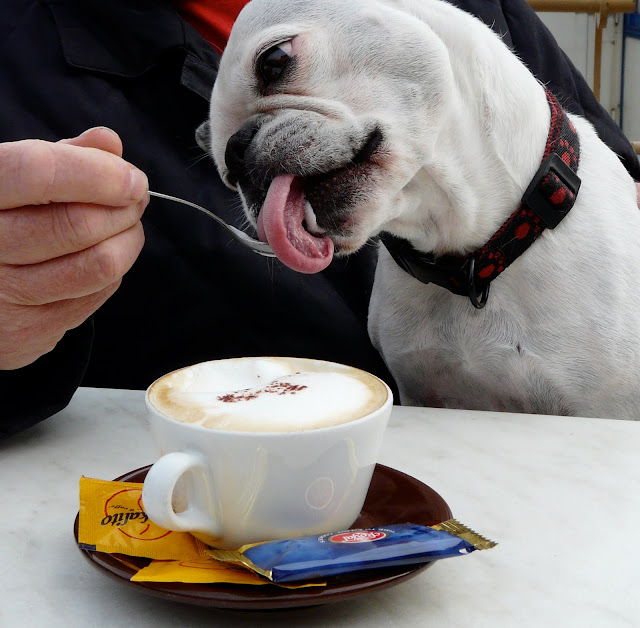 I posted two different photographs of Lou on Monte Carlo Daily Photo today but had to show her to you here as well.

This is Lou, the French bulldog who belongs to Mister Brian - owner of Monaco's best known delicatessen. They are taking a coffee by the port - or rather Lou is allowed to taste Mister Brian's cappuccino - off the spoon, of course. Not that Brian would mind sharing the cup with Lou - he's besotted.

Lou is celebrated in Monaco - she's appeared in a book about the Principality and if you saw Piers Morgan's television programme you will have seen him interview Mister Brian - and Lou.

And remember when Lou was stolen? If not, you can read about it by clicking on the link.
Posted by Jilly at Thursday, November 19, 2009 4 comments

Wot, No Sheep in Monte Carlo? 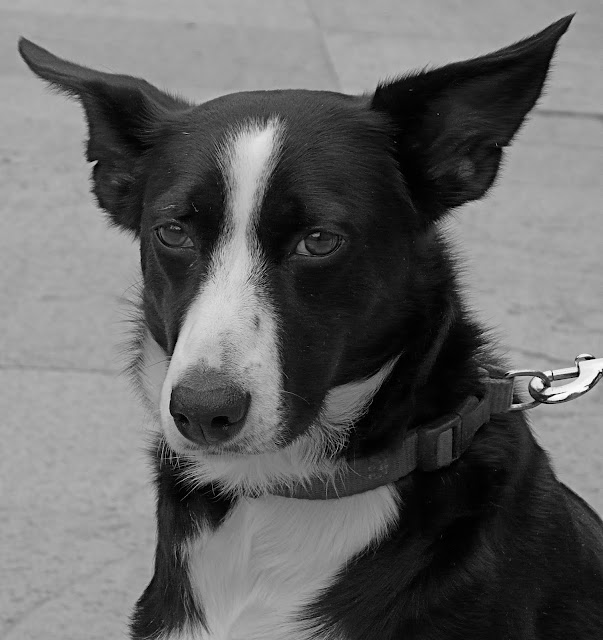 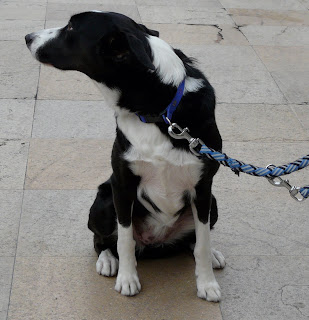 You don't expect to see a Border Collie in Casino Square in Monaco. They would seem to belong in the Welsh hills where I lived a lifetime ago.

Yuna is a 5 year old smooth-coat Border Collie and wasn't remotely interested in having her photo taken. Despite my making all sorts of fascinating noises, she mostly turned her head away as you see in the smaller photo. I expect she was dreaming of hills and sheep, not Monte Carlo ladies and their smart clothes. Yuna was on holiday but normally lives in Trieste.
Posted by Jilly at Monday, November 16, 2009 4 comments 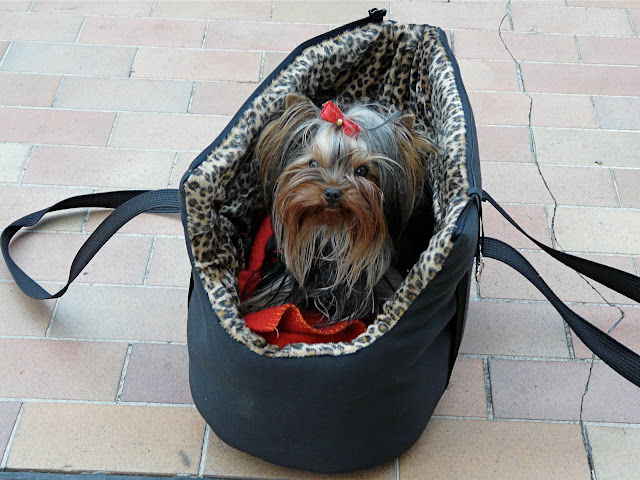 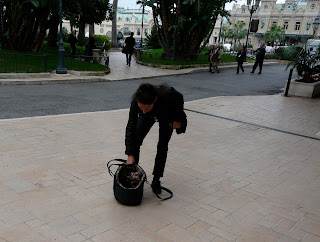 It's getting towards dusk in Monaco and I notice this lady putting her little dog into a carrying bag.

Meet Shelby, a tiny Yorkie, and 15 months of age. She lives in Antibes. Her owner told me Shelby is her fifth Yorkie, or did she say her seventh. I forget. So often when we love a particular breed, there is no other for us. Don't you love Shelby's matching bow and blanket.

Note - in the background of the smaller photo you can see Monte Carlo's famous casino. 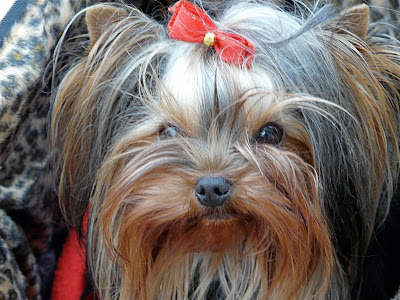 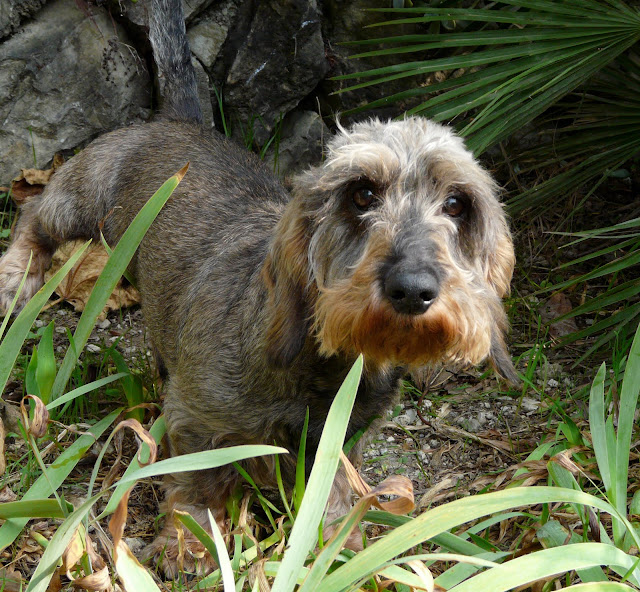 Well, you'd give a strange look if someone took your photo whilst you were taking a pee...

Jarvis is a wire-haired dachshund from South Africa, staying on the French Riviera, prior to coming to the UK with his sister, Tallulah.

You can see the dog who lives on a boat on Monte Carlo Daily Photo today.
Posted by Jilly at Thursday, November 12, 2009 4 comments 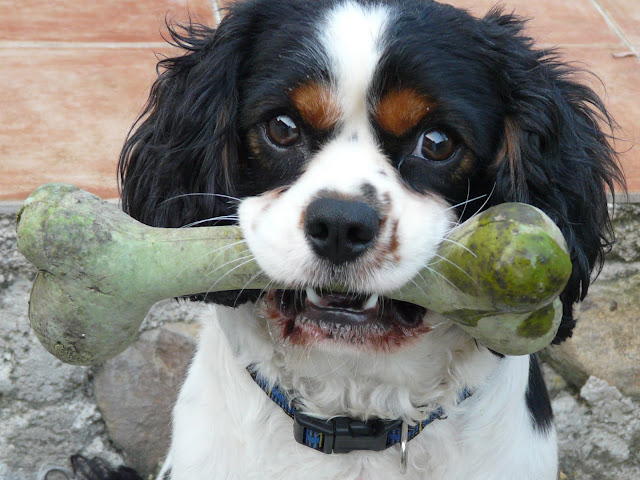 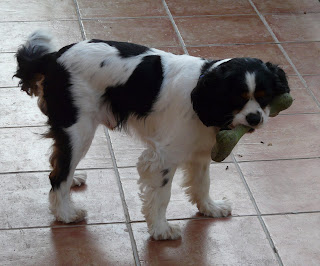 It amazes me how some dogs can carry a bone half the size of them - well I exaggerate, of course.

Meet Buzz, a 2 year old Cavalier King Charles spaniel who lives in Antibes, just along the coast from Nice. 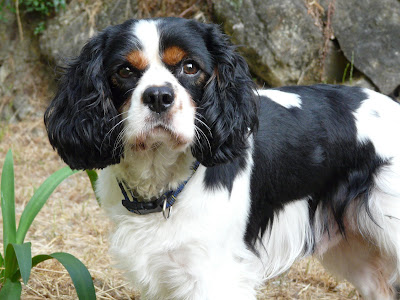 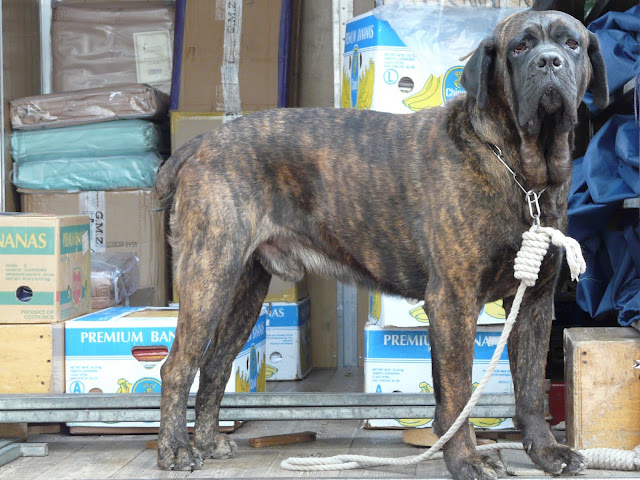 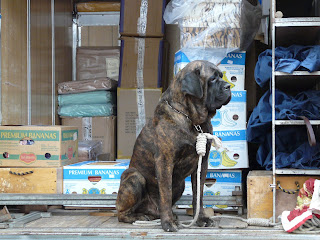 He looks fierce, doesn't he? This is Baro who is a Cane Corso Italiano and is guarding his owner's truck in Ventimiglia market.

Bet he's a softy at home. 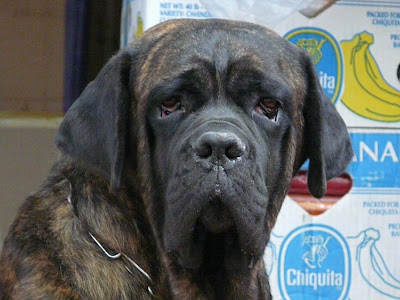 Close Encounters of the Two-Feet Kind 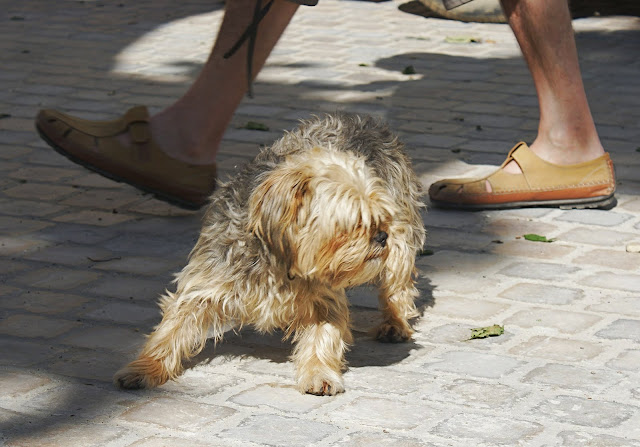 Guest photographer today! John Carroll follows Riviera Dogs and kindly sent me this photograph taken in Peyriac de Mer - not technically the Riviera but in France and on the Mediterranean so we'll cheat and call this little Yorkie a Riviera Dog. Peyriac de Mer is in the Languedoc-Roussillon.

Don't you love the mixture of feet here and John's title. 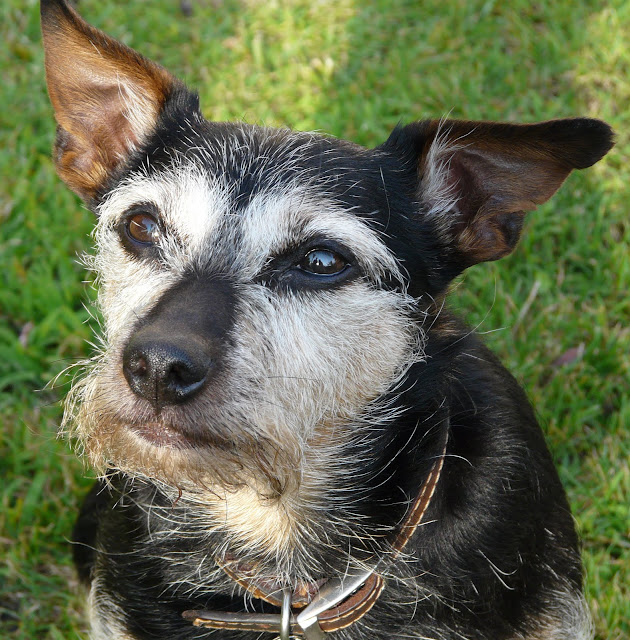 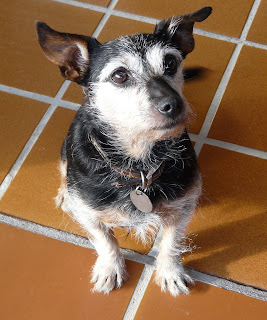 Don't you just love mutts like this? Somehow he's a mutt, as opposed to a crossbreed (same of course). He'd be the naughtiest and most adorable dog in a film, wouldn't he? We'd all be in tears at the end as he saves his master from the devastating fire and everyone lives happily ever after...

Hunter was born in England and now lives in Menton. In England he was known as Mr. Hunter, now of course he is Monsieur Hunter or more often, Monsieur 'unter!
Posted by Jilly at Tuesday, November 03, 2009 4 comments