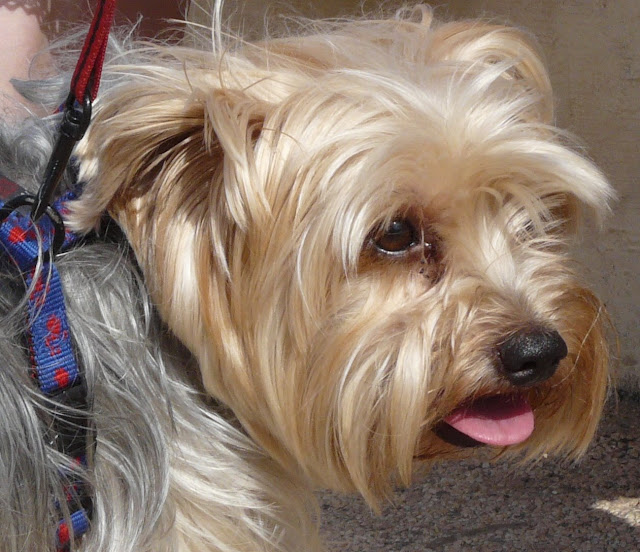 On the day of the Plant Fair in Menton I photographed two Yorkies. Nina who is four years old and Tess who is two and a half years old - both live in Menton. And guess what, I can't remember which photo relates to which little girl. As I've probably said before, I need a secretary! 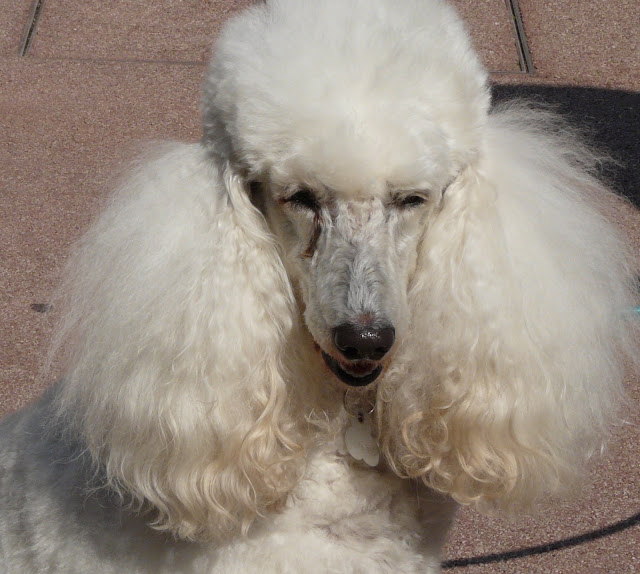 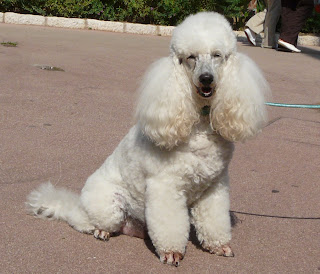 Daisy was taking a turn around the Casino Gardens when I stopped her owners and asked if I could photograph her. In beautiful condition, as you can see - she is 10 years old and lives in Germany.
Posted by Jilly at Saturday, September 27, 2008 3 comments 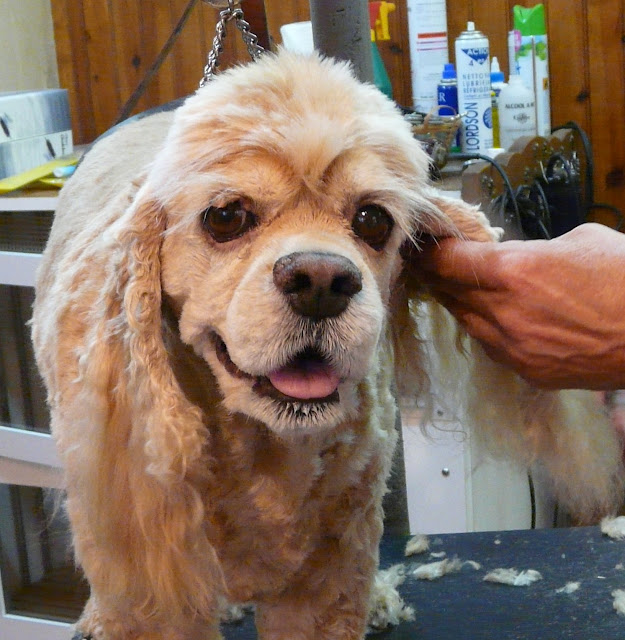 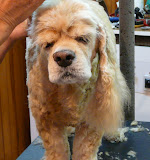 What's a girl to do...how would you like if someone came along and took your photograph when you were bang in the middle of being made beautiful?! Things aren't what they used to be.... 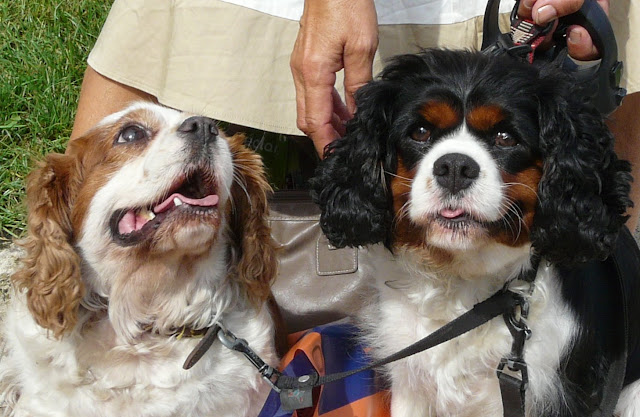 Mother, Celeste, is on the left and daughter, Tina on the right. I bumped into these two Cavalier King Charles beauties walking in the Casino Gardens in Monte Carlo. 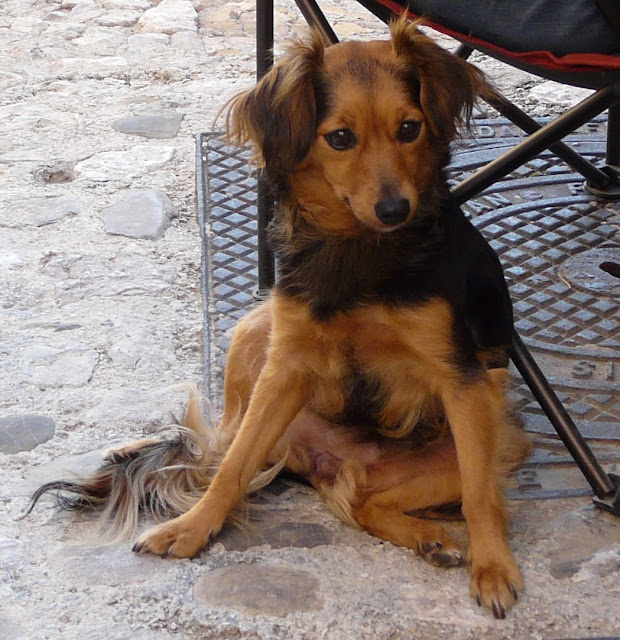 This bright little bundle of beauty is called Ziya and she lives opposite the beautiful restored Chateau in the village of Gorbio. Last year I photographed her with her puppies and if I can find those photos I'll show you another time. Ziya lives with a great lady called Leticia. 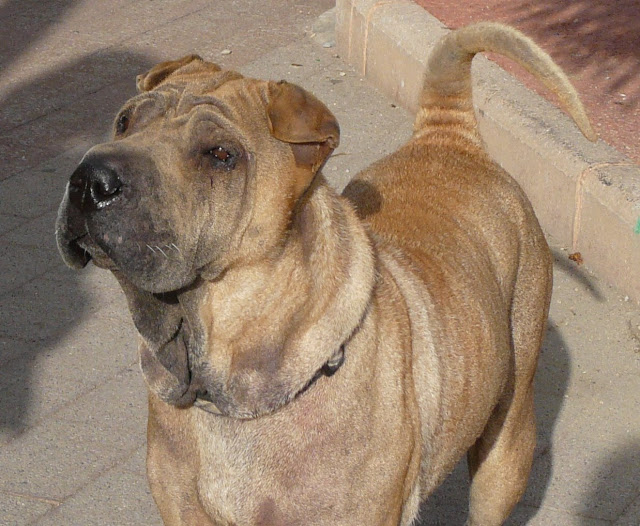 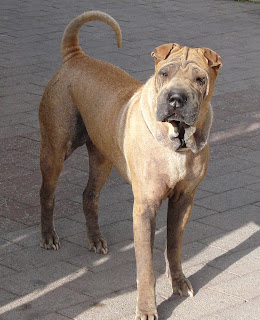 A handsome Shar-pei who lives in Roquebrune-Cap-Martin. This 7 year old was out for a run along the promenade with her owner.
Posted by Jilly at Friday, September 19, 2008 0 comments 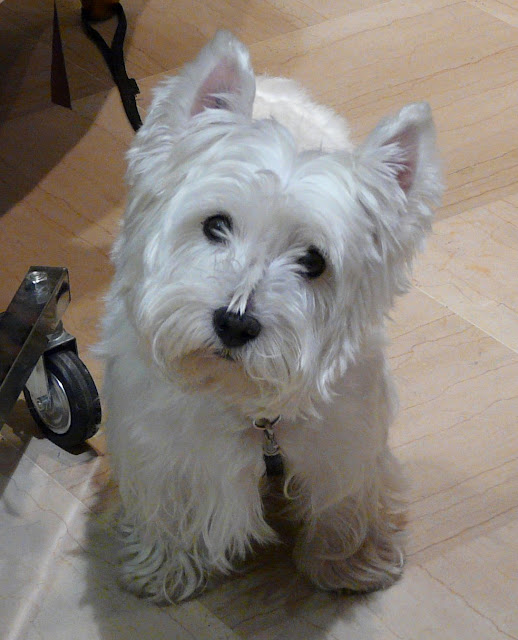 Whisky, the West Highland White terrier, belongs to one of the luxury lingerie shops in the Metropole Centre in Monte Carlo. Find a shop called Elle and you'll find Whisky. Whisky is 7 years young.
Posted by Jilly at Thursday, September 18, 2008 1 comments 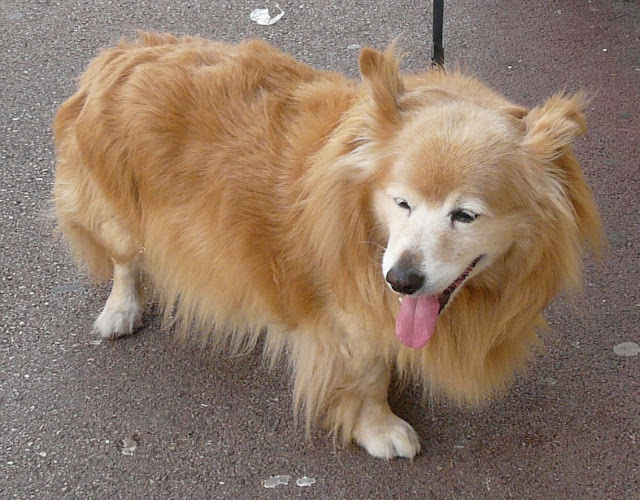 A lovely old dog - he's 15 - standing outside the boulangerie in Carnoles. A Corgi I was told. He is on holiday from Paris.
Posted by Jilly at Wednesday, September 17, 2008 1 comments 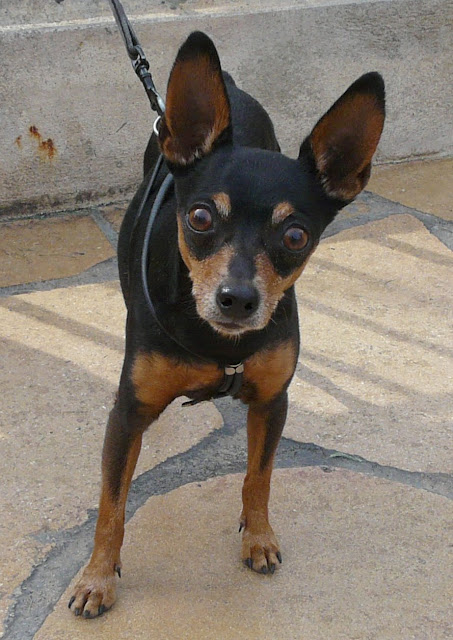 A smart young man - well actually, not so young - 9 years old - but looking quite the opposite. So bright eyed and never blinking. He was standing in front of the casino of Monte Carlo, watching the beautiful people walk by. Leo is a Miniature Pinscher and comes from Clermond-Ferrand.
Posted by Jilly at Monday, September 15, 2008 1 comments 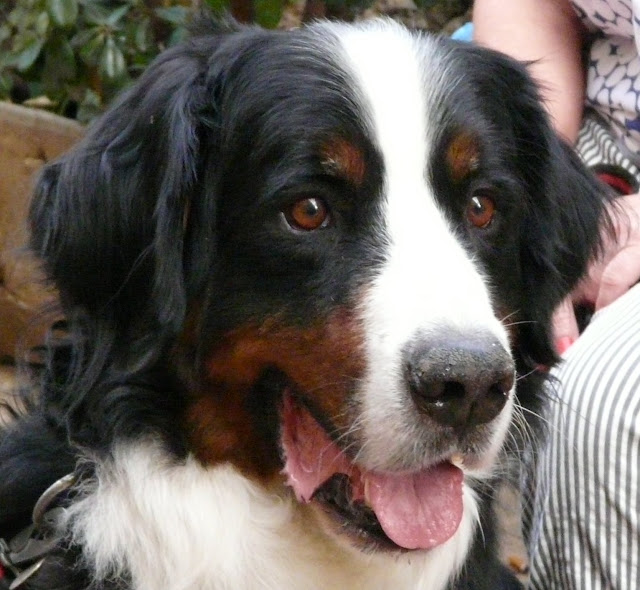 Morris, a beautiful Bernese Mountain Dog. His owner was taking a rest on a bench and he was quite happy to pose for a shot. Morris - such a beauty - is 6 years old and lives in Sweden.
Posted by Jilly at Sunday, September 14, 2008 1 comments 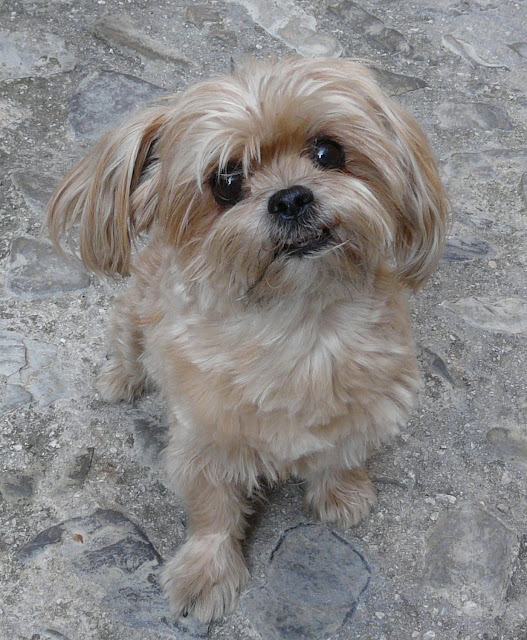 Meet Shaka - a Shih-tzu crossed with a Yorkie. Cute mix. 9 years old and living in Gorbio, near to Menton. I met this adorable bundle when I walked up to the village to the see the art exhibition there.

Funnily enough Lucky (see the post a few days ago) is also a Shih-tzu X Yorkie but quite a different colour and look.
Posted by Jilly at Friday, September 12, 2008 2 comments 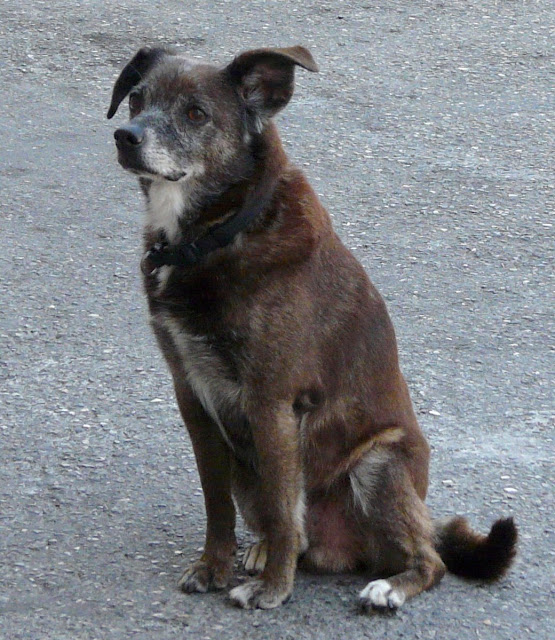 This dog sat and waited - and waited - outside Menton's railway station. And in the road too, as you see in the smaller photograph.

I imagine his owner was inside buying a ticket, making an enquiry, perhaps getting a newspaper. But nothing would distract this dog - just waiting, waiting, waiting. I tried to distract him, get him to look at the camera. No way. How faithful our dogs are.
Posted by Jilly at Tuesday, September 09, 2008 2 comments 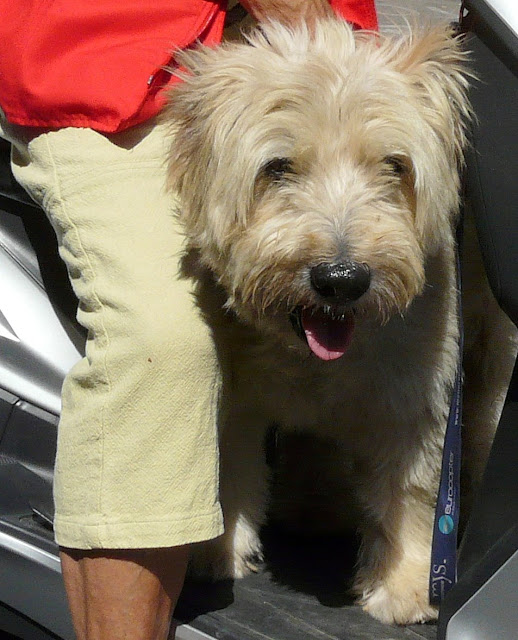 This is Willy, a Berger Pyrénées (Pyrenean Shepherd Dog). He rides around Menton on a scooter with his owner. Willy is 13 years old - you'd not know it, would you? See Willy on his bike on Menton Daily Photo today.

This small sheepdog of the Mountains of the Pyrénées is considered the oldest of the French herding dogs. They were used in concert with the large white sheep guardian dogs, the Great Pyrénées (Pyrenean Mountain Dog) of the region. The little dog herded the sheep. The big dog watched over them. The natural abilities of this shaggy shepherd are legend - flocks being entrusted to the two different dogs without a human handler. They were officially recognized by the French Kennel Club in 1921.

The breed is also called a Labrit in France. You see many in the south of France.
Posted by Jilly at Saturday, September 06, 2008 2 comments 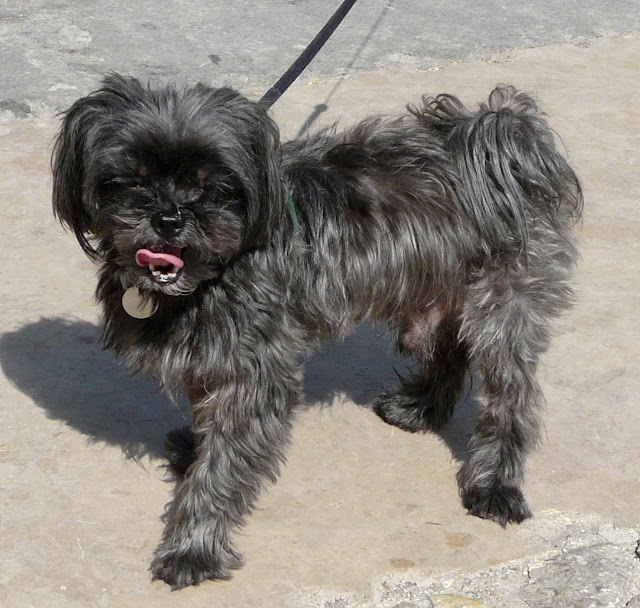 This is Lucky. He's a Yorkie/Shih-tzu mix. Unusual coloured dog, I think - a beautiful grey. Lucky lives in Gorbio and is 8 years old. Cute 'mix' eh?
Posted by Jilly at Friday, September 05, 2008 2 comments 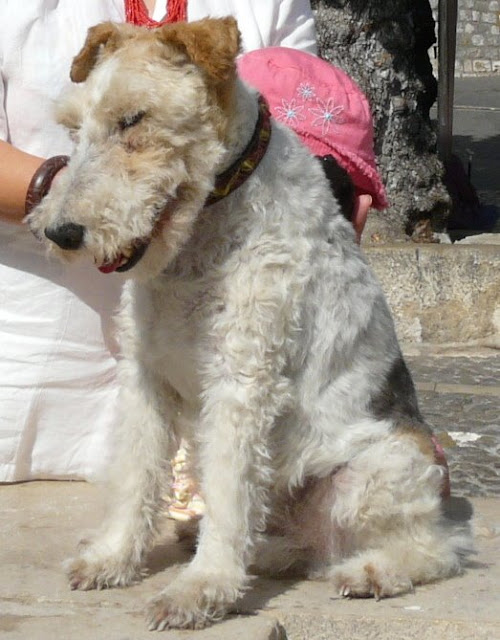 Meet Jicky, a 14 year old Wire-Fox Terrier. In the smaller photograph (click to enlarge) you see the granddaughter of Jicky's owner. Lois loves Grandma's dog. She lives in Orleans, the daugher of a Scottish father and a French mother so she will grow up to be bi-lingual - not struggle like the rest of us. Grandma, granddaughter and Jicky were in Gorbio for the Blessing of the Animals. 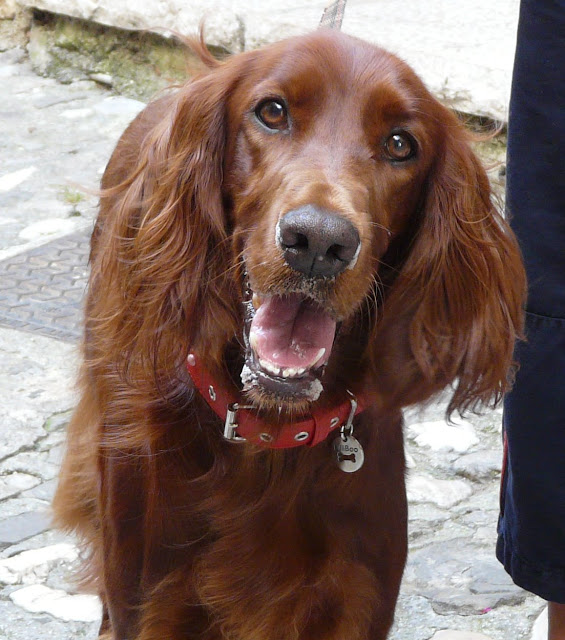 Sissy is a gorgeous 4 year old Irish Setter who lives near to Milan. On holiday in Menton, she was brought along to the recent Blessing of the Animals in Gorbio.
Posted by Jilly at Wednesday, September 03, 2008 2 comments 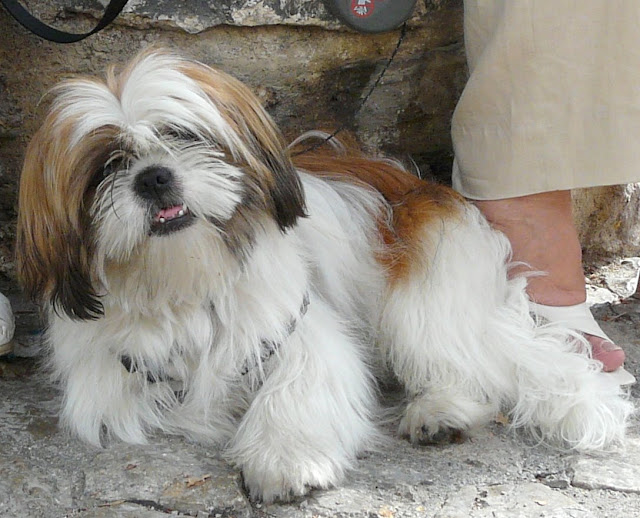 Just a pup. 10 months old and adorable. Canaille lives on the Route de Gorbio in Menton. Seen here in Gorbio village, she was brought up for the Blessing of the Animals.

Canaille has several meanings but here it means 'rogue' or 'little devil' - in other words a term of endearment.
Posted by Jilly at Monday, September 01, 2008 1 comments