The Performing Dogs at the Monte Carlo Circus - 4 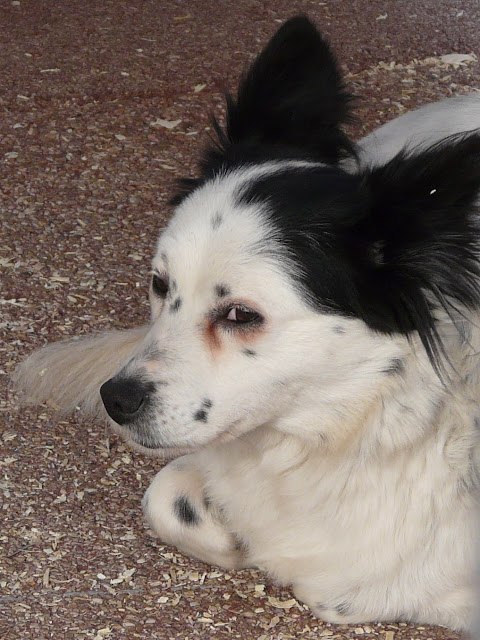 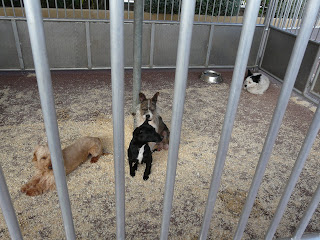 This little Papillon or Papillon-mix is sitting at the back of the enclosure, not at all interested in the people looking in. Papillons are, by nature, a little wary of strangers so perhaps that accounts for it although a circus dog must have to meet all sorts, one would think.
Posted by Jilly at Saturday, January 31, 2009 2 comments

The Performing Dogs at the Monte Carlo Circus - 3 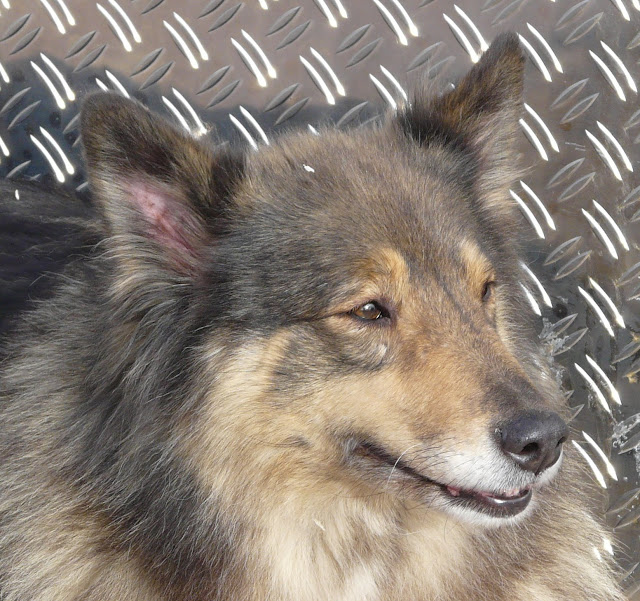 Another circus dog - this time a pretty little Shetland Sheepdog mix - I think?

There's a labrador on Monte Carlo Daily Photo today waiting to steal popcorn from a child...as if!
Posted by Jilly at Friday, January 30, 2009 1 comments

The Performing Dogs at the Monte Carlo Circus - 2 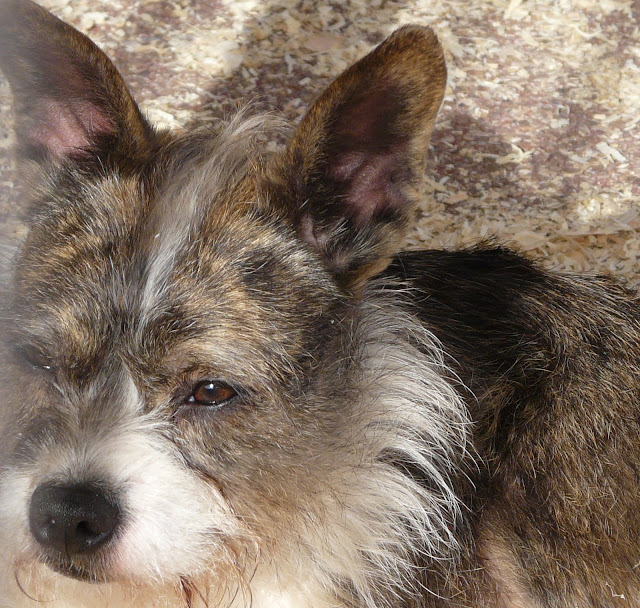 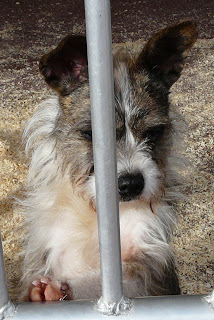 This little dog really looks like a circus dog, doesn't he? Can't you just see him doing tricks to make the audience laugh? Perhaps he's the one that turns somersaults?

The main photo fades on his left because that was shadow from one of the bars.
Posted by Jilly at Wednesday, January 28, 2009 2 comments

The Performing Dogs at the Monte Carlo Circus - 1 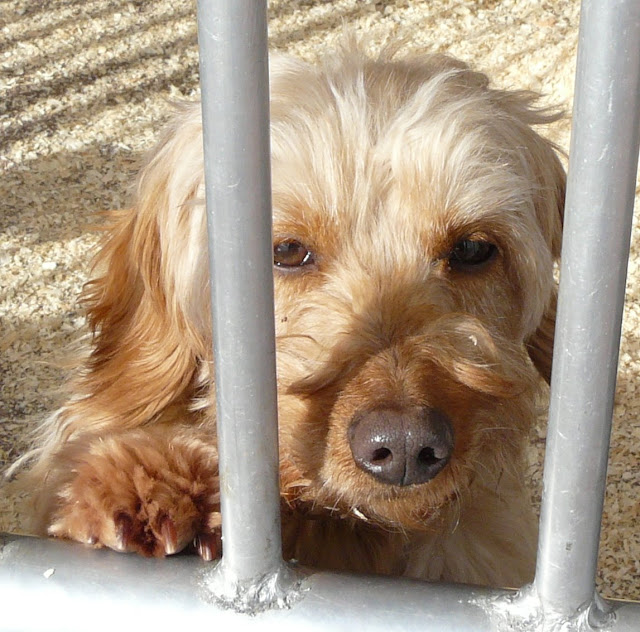 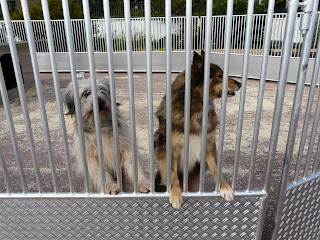 Each year Monaco holds holds the Festival of Circus which is one of the most prestigious events in the circus world. This year, the 33rd year, one of the acts was 'Wolfgang Laurenburger and his Performing Dogs,' They won one of the special prizes.

There were three exercise areas along by the sea, not far from the main tent and over the next few days we'll take a look at more dogs.

You can see a beautiful little black dog and also a a photo of all of them performing on Monte Carlo Daily Photo today.
Posted by Jilly at Monday, January 26, 2009 3 comments 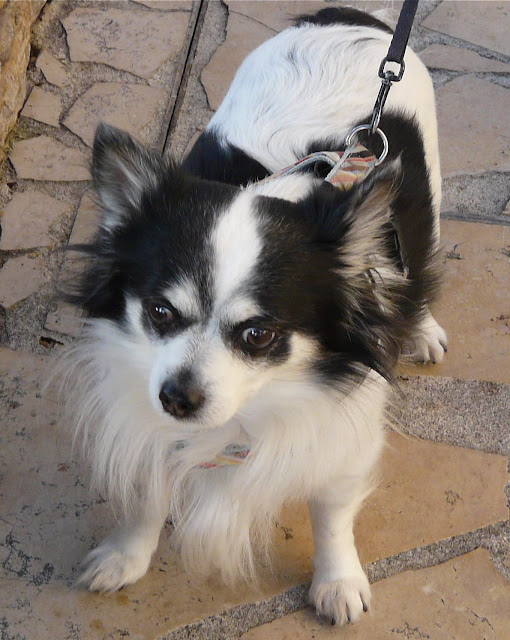 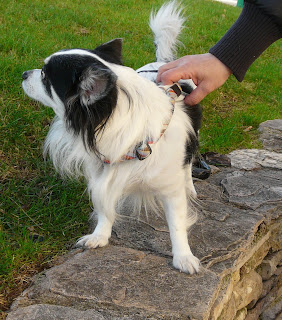 A really cute little Papillon in Fontvieille, Monaco but he wouldn't keep still, wouldn't look at the camera, so this is the best I could do. Papillons, by nature and breeding, are wary of strangers, so it's not a surprise.

The owner of Pepito - who is 10 years old, by the way - said he's not a pure-bred Papillon but is a cross between a Papillon and a Chihuahua is, apparently, known as a Chihuahua Irlandais (Irish). I can find no reference to this breed anywhere so have listed him here as a Papillon as he looks like one.

I've often found dogs in France called something that doesn't exist - sold to owners as a specific breed when there is no such thing.
Posted by Jilly at Friday, January 23, 2009 5 comments 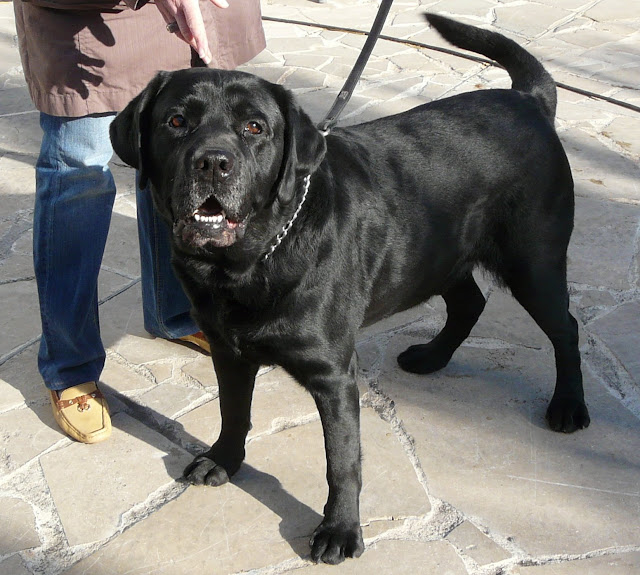 This fine looking labrador was walking past the tigers, currently installed in an enclosure outside the circus tent. I was surprised that all the dogs walking by just ignored the tigers - and vice versa. There are several barriers, of course, between the public and the tigers, but even so you'd think the dogs would be intrigued by interesting smells and sounds.

Roy is 7 years old and lives in Monaco.
Posted by Jilly at Wednesday, January 21, 2009 3 comments 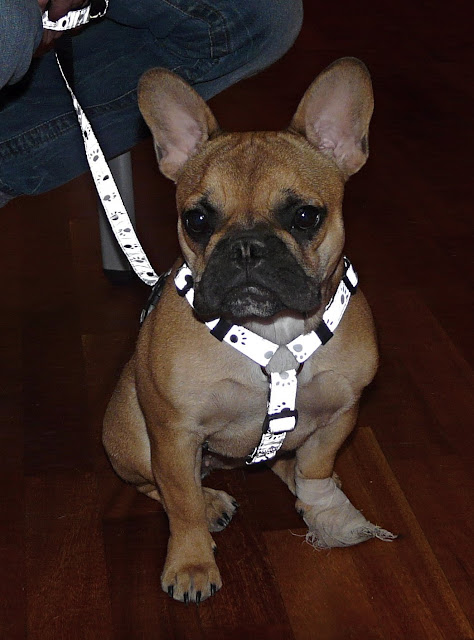 This photograph wasn't supposed to turn out like this. I was at the vet's office collecting one of the dogs and saw this adorable French bulldog with the bandaged paw. I turned the camera to the pet setting and snapped - then thought perhaps I needed flash and took a couple more. Well the ones with flash didn't turn out at all because, I suppose, the flash didn't fire. And this one, as you see, has picked out the luminous quality of the harness and lead, leaving the dog rather dark. Still I quite like it, and adore the dog.

So Didji is obviously a dog who shows up in the dark. Isn't she adorable? She's only a pup - 8 months old, and lives near to Monaco in Beausoleil.
Posted by Jilly at Sunday, January 18, 2009 4 comments 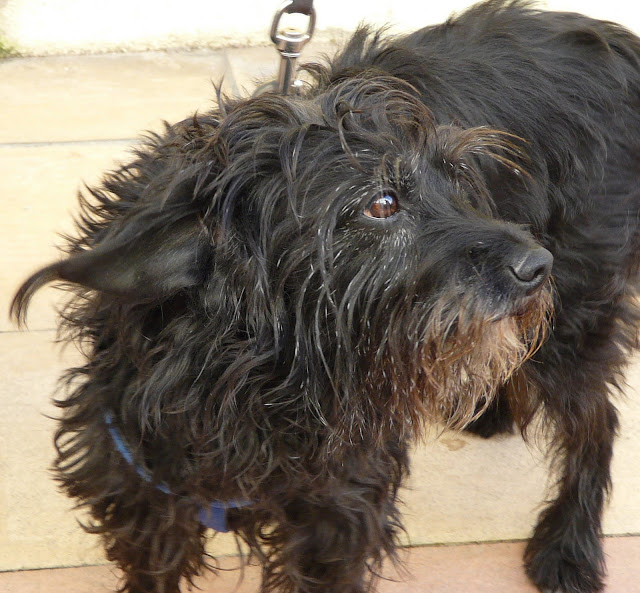 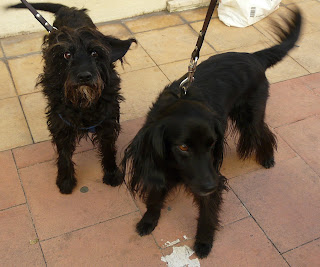 These two little black bundles of energy didn't want to be photographed but we sort of got there. Not an ideal place - part of the walking street of Menton that has a rather grubby surface and with my freezer bag in the background - not good photography, Jilly!

They are mother and daughter. Lila is 10 (she's the one with the shorter coat) and her daughter is Topis (wiry haired). Lila is 10 and Topis is 9. They were with their charming owners on a visit to Menton from Milan, where they live.

Update on Mama Mia and Mistral - please click on the link. 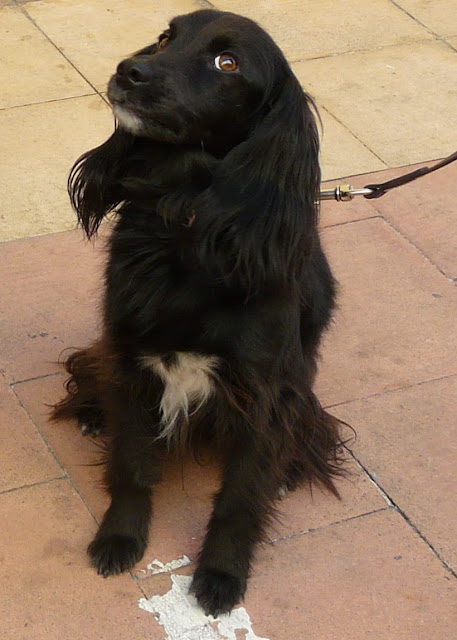 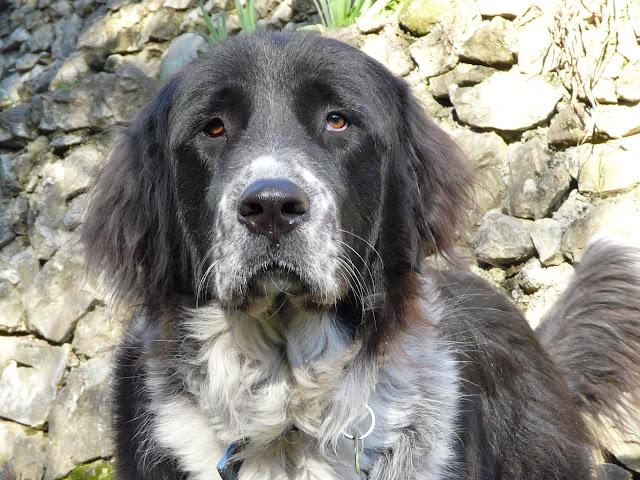 Meet Cali - she is a mix: a Pyrenean Mountain Dog and a Newfoundland and she is enormous! Isn't she gorgeous. She is 19 months old and lives in Monaco and she is adorable, so obedient and so gentle, which is just as well considering her size!

This was taken here, at Pension Milou - not exactly a dog I met walking along the beach but I wanted you to see her. She's fallen in love with a Golden Retriever since arriving a couple of days ago and they play non-stop.
Posted by Jilly at Saturday, January 10, 2009 5 comments 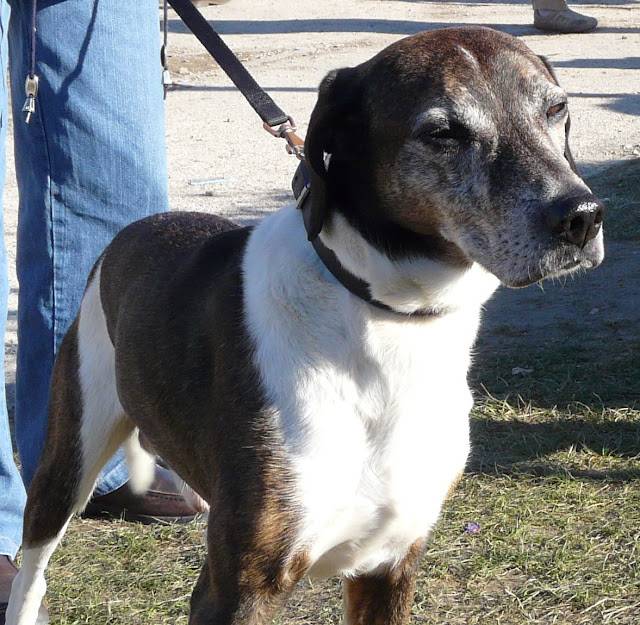 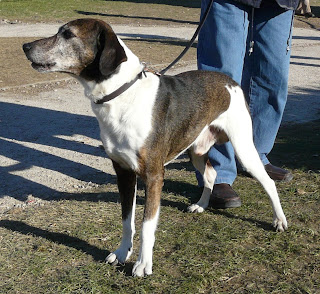 Eyes slightly closed against the sun, Ubaldo poses for the camera. He's 12 years old, a mix, and lives in Milan. He and his family had come to Menton over the weekend. A very handsome dog, don't you think?


For an update on Mama Mia and Mistral please click on Postcards from 'Pension Milou.'

To see a saint of a woman who cars for 250 dogs please click on Bibi in Belgrade.
Posted by Jilly at Thursday, January 08, 2009 1 comments 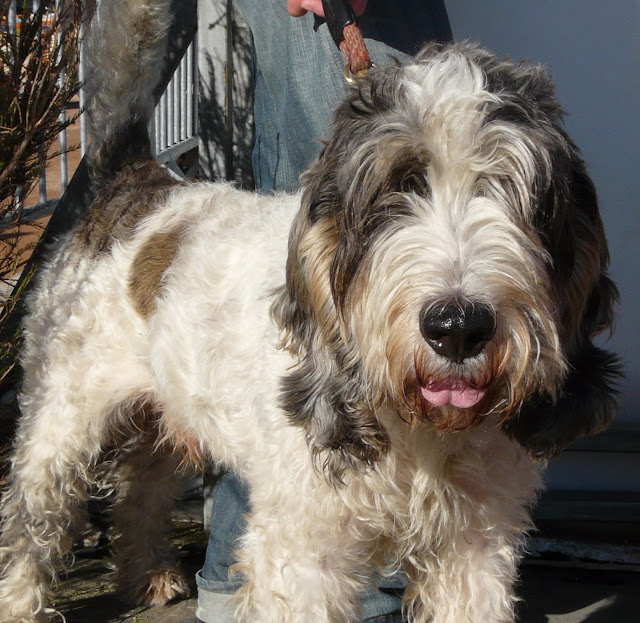 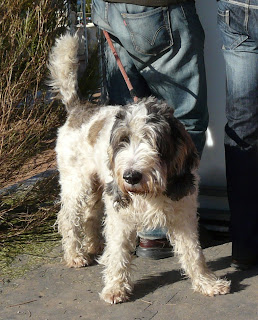 And isn't he gorgeous. He's standing here with his owners who are watching the skating at the ice rink by the Bastion in Menton. They were on holiday in Menton from Turin in Italy. You can read about both sizes of this breed by clicking on the link.

If you'd like to see a couple of great dog photos on Sydney Daily Photo, taken by my friend, Sally - please click on the link. They are really super.
Posted by Jilly at Wednesday, January 07, 2009 4 comments 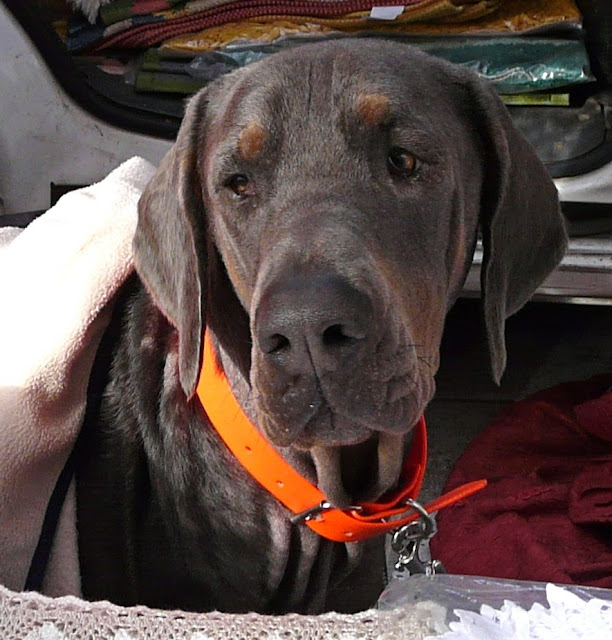 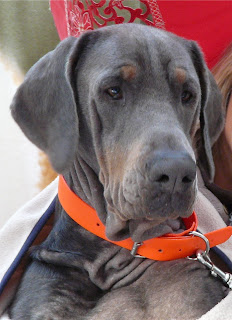 You'd not think these two photos are of the same dog, would you? The first was taken when he was undercover and so less light. I actually prefer the smaller photo - you see the beauty of his expression but it's out of focus - it also shows his true colour.

Focus on the eyes, and the nose is out of focus - focus on the nose and the eyes are - and I'm still learning about Depth of Field...don't ask!

He's a two -year old mix of Weimaraner and Dobermann and lives in Sospel. You can see both parts of the mix, can't you? He's so big though, I thought he had Great Dane in him.

I met him at the market in Carnoles where his owner has a stall selling linens. Can't believe it (yes I can!) I either forgot to ask his name or more likely forgot to write it down, so he's Blue Dog!

For an update on Mama Mia and Mistral please go to Postcards from 'Pension Milou.'
Posted by Jilly at Friday, January 02, 2009 2 comments