Yesterday we saw Poppy's tail. Here is her adorable face with one dark eye and one blue eye.  In the old days the shepherds called am Old English Sheepdog 'wall eyed' when it had one eye of each colour and believed the dog would never go blind. Maybe /probably a myth.

I have a feeling she knows she's pretty, don't you? As I said, yesterday, Poppy lives in Holland and is on the French Riviera for a series of dog shows known as the Riviera Circuit - Monaco, San Remo and Nice - three shows in three different countries which gives dogs a chance of getting various international titles.

Today is the first day of Monaco's annual dog show.  This is an Old English Sheepdog's tail getting a little trim.  Come back tomorrow and I'll show you the other end and her beautiful face! She's called Poppy, lives in Holland and won Best Bitch at Crufts this year - no small feat in the dog world.
Posted by Jilly at Friday, April 27, 2012 3 comments


My friend Carla and I went for a walk above Gorbio yesterday - she had to vote. Here's a snap of her dog Billie, named for Billie-Jean King or perhaps for the Elton John song, I'm not sure.

Billie is around 7 years old now and lives in Gorbio.
Posted by Jilly at Monday, April 23, 2012 4 comments


'Top Marques' is on in Monaco at the moment. This is a gathering of all the latest supercars in the world. Boys' toys is what it's all about. But it's not only cars - there are several motorbike stands including one for Harley bikes, so it's no surprise to know this little 4 year old chihuahua is called Harley. He sat happily on the sofa alongside the bikes all day long. Harley normally lives in Switzerland.

He's so cute and a perfect pure white. 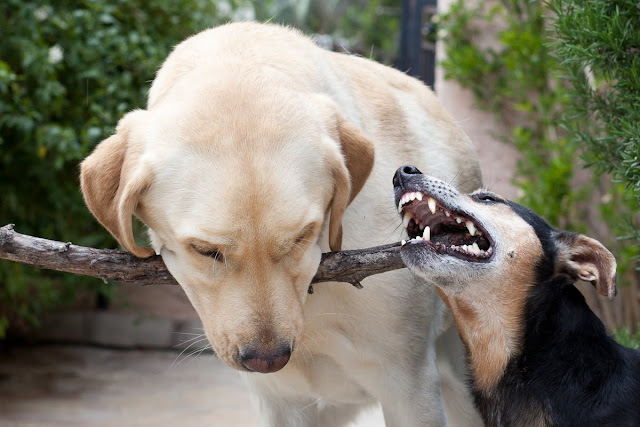 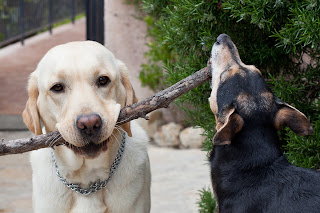 Ricky, the little black and tan dog, has been trying to break this small branch (or large twig!) off a dead bush for weeks now. Today he succeeded at which point, Daisy the labrador, decided it was her branch.

Both dogs have featured on Riviera Dogs before but just in case you've not met them - Ricky lives in Monaco and Daisy lives in Cannes although she is here for a seven month stay as she is moving to Perth in Australia when all the paperwork is completed. So she thinks she's my dog (for the moment) and so do I! Both these dogs are totally adorable. 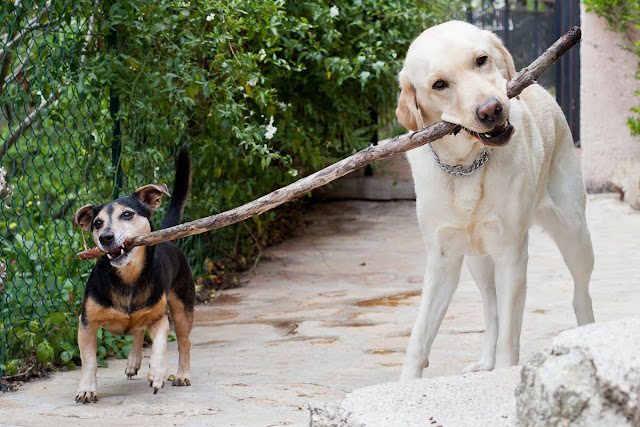 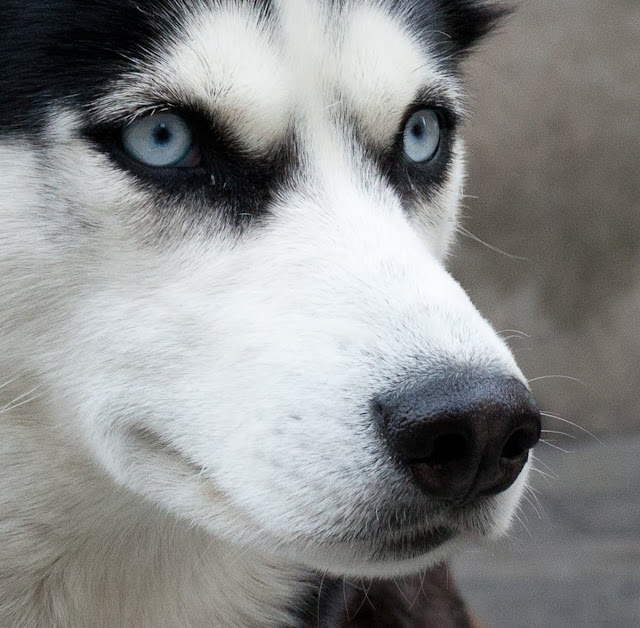 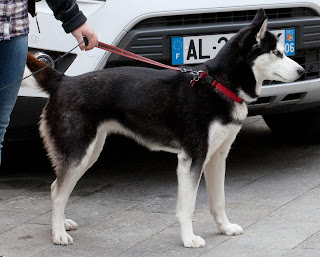 It's not ideal photographing dogs near to a pile of parked cars, which is how it always is in the square above the basilica in Menton. 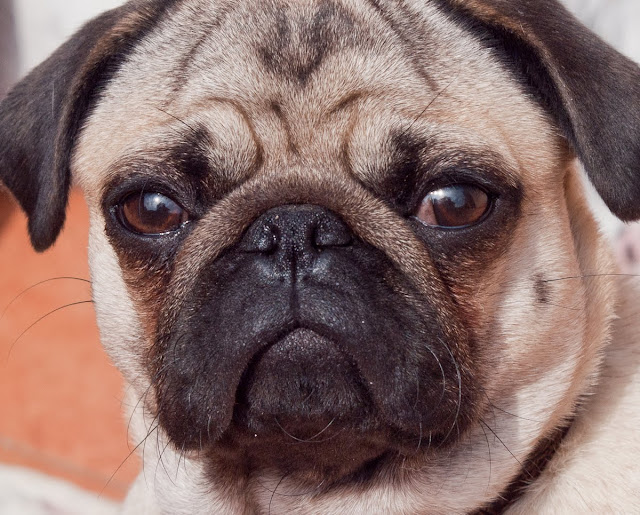 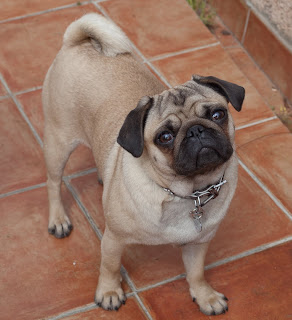 Doesn't she look fierce - or wise - or cross! Pugs have the most incredible range of expression on their adorable squashed up faces, don't they?

Meet little Karaly who lives in Mougins, near to Grasse. She's around 10 months old now. 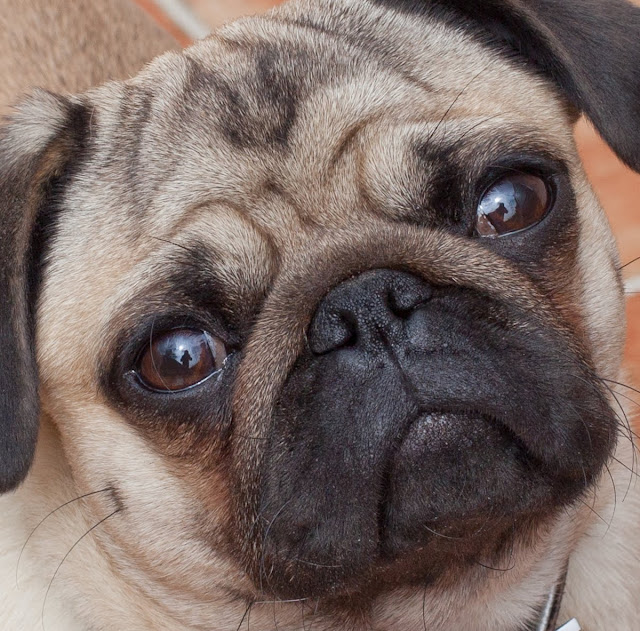 White dog - white line - outside a fish stall at Menton's market this morning.
Posted by Jilly at Thursday, April 05, 2012 5 comments 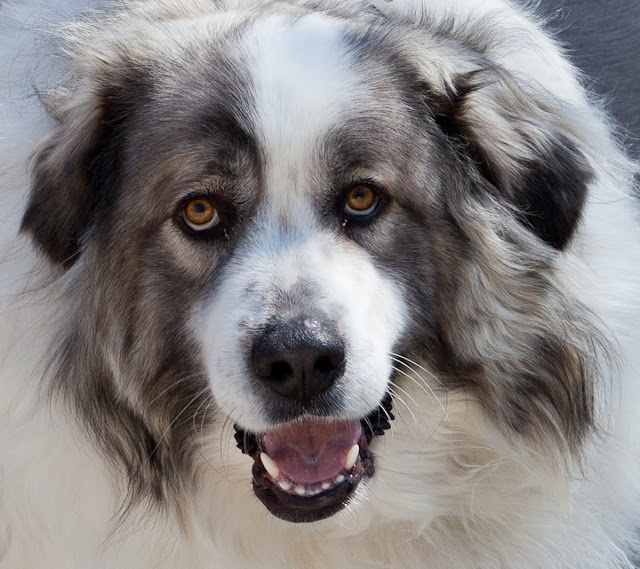 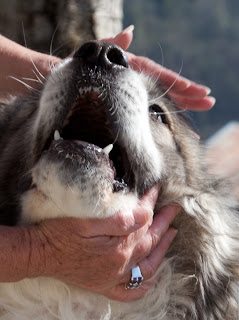 This beautiful Pyrenean Mountain Dog lives in Gorbio and is a two and a half year old male. He's called Ice. He wasn't crazy about posing but was very good at doing his job as a guard dog, despite his owner trying to persuade him to smile for the camera. A lovely rapport though, between dog and owner. She absolutely adores him and the feeling is obviously mutual. 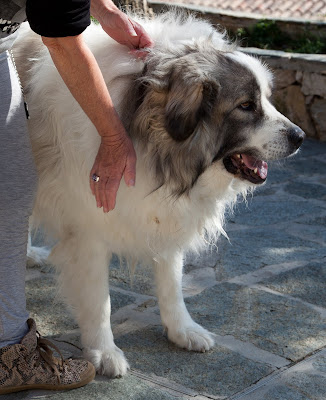