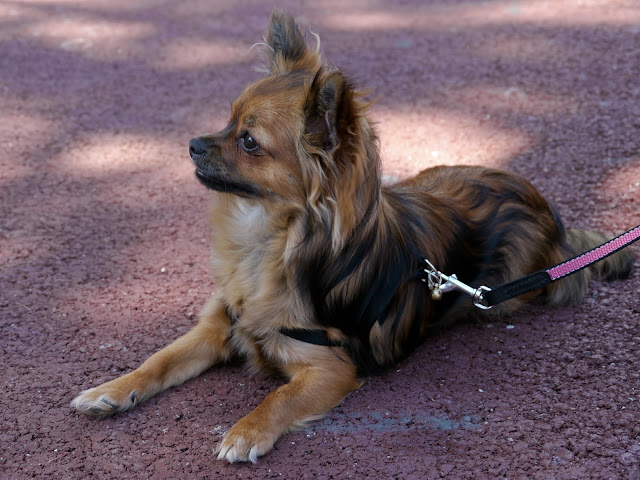 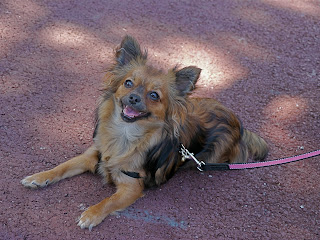 This adorable Longhaired Chihuaha was walking around Port Hercule in Monaco. She's only 10 months old and was so good. When her owners told her to sit she did, when they told her to look up, she did...but only for them. I couldn't get her to look at me. How well-behaved though for such a baby.

Fifi lives in Holland between Hilversum and Utrecht. 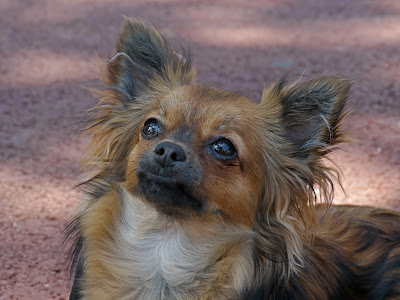 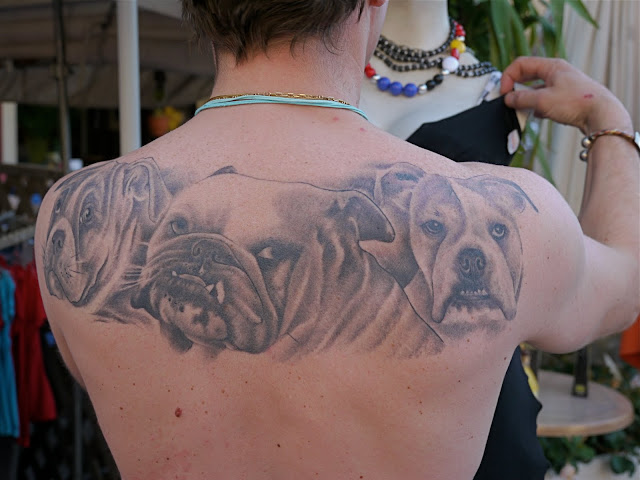 This was published on Menton Daily Photo a few days ago and it was suggested I should put it on Riviera Dogs.

This guy works on a clothing stall near to the market in Menton and was more than happy to have his tattoos photographed. Left to right - Lady, Churchill and Petula. He insists all three are English Bulldogs but the one on the left looks like a Boxer and the one on the right a bit like a Pit Bull. 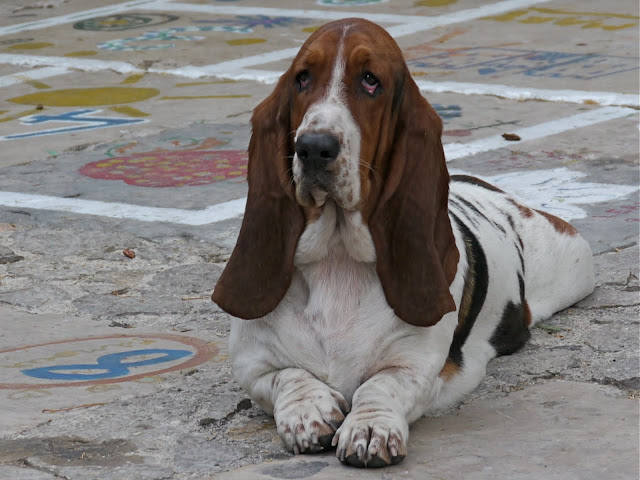 Riviera Dogs has featured Boutchette, the Bassett Hound before. Last August she was 6 months old - the resident Beausejour dog - and sitting in the sunshine. Do click to see a better photo than today's because after endless heat and sun, it clouded over and even rained about three drops, but I'm not complaining other than lack of light in photos.

Today she is sitting outside the Beausejour, the great restaurant in Gorbio village and what she doesn't know is that tomorrow she gets a new sister - a miniature shih-tzu.

If you wonder what is on the paving stones behind her, well it's hopscotch - French hopscotch - bright colours and not a child goes by without hop, skipping and jumping on it.
Posted by Jilly at Monday, July 26, 2010 5 comments 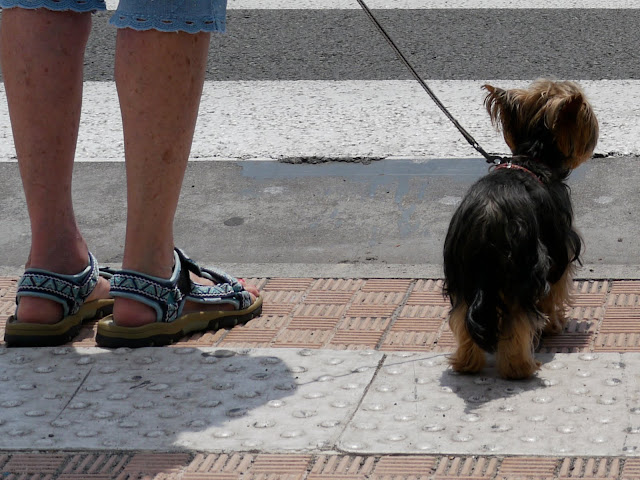 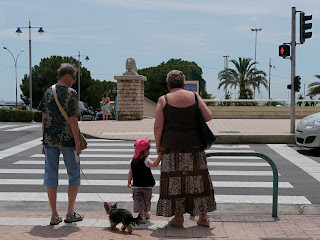 What a well-trained little dog. In the smaller photo he approaches the crossing and then he waits for the lights to change.
Posted by Jilly at Saturday, July 24, 2010 4 comments

Tess - thrown in a bin at one day old! 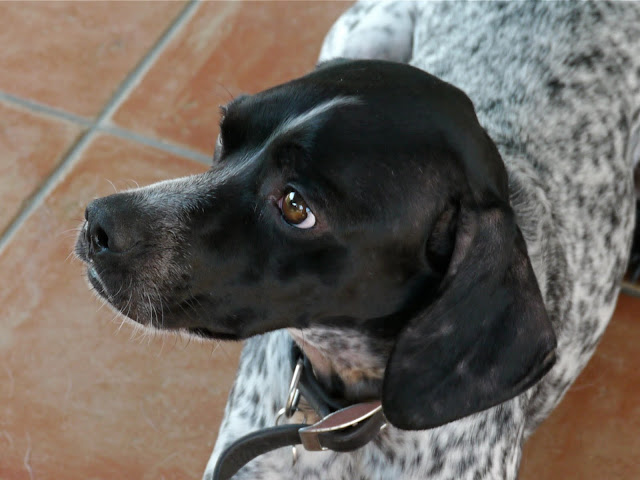 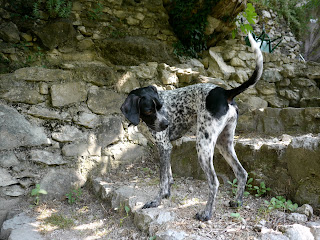 About three years ago four puppies - only one day old - were found in a rubbish bin in Grasse. The lady who found them was pregnant, so no easy task to hand-rear the pups but she did. Some members of the British community contributed to the buying of special milk etc and then at four weeks old the pups went to their new homes.

With no mother to train them they don't react quite like normal dogs. I've cared for two of them now at Pension Milou and both share similar characteristics. They are needy, incredibly hyper but adorable, they can open every door in the place (grrrr...) and they bark like crazy if other dogs play but they'll run for a ball endlessly. They have to be temped to eat at first but later they do well. They seem to be a mix of pointer - perhaps there is some whippet with that tuck-up. I don't know about those ears tho and the undershot jaw.

This is Tess, who lives with a guy and his wife-to-be, both of whom work on yachts in the south of France. They adore her. Lucky Tess eh? 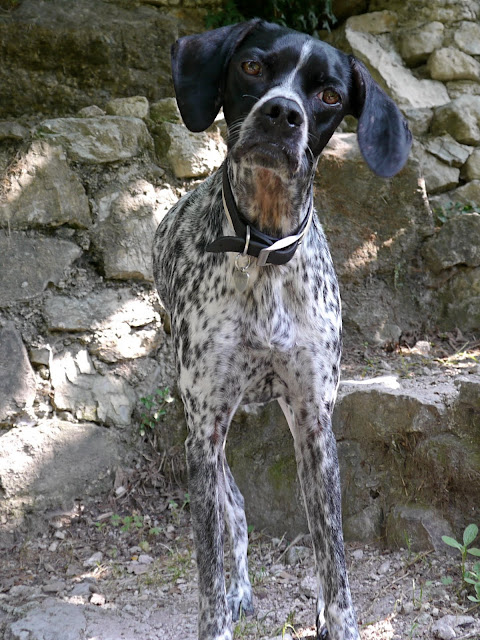 Learning to be a French Dog... 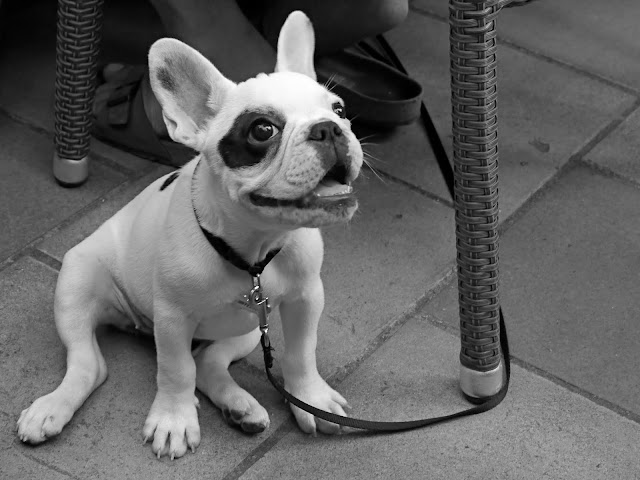 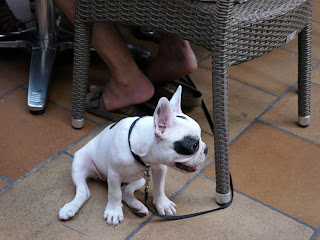 Who can resist a 3 month old French bulldog puppy? Meet Chica who is learning to be a real French dog as French dogs are allowed in restaurants - or nearly all of them. Vive la France!

Chica is seen here at Le Balico in Menton on Bastille Day. She lives in Roquebrune-Cap-Martin.
Posted by Jilly at Saturday, July 17, 2010 7 comments 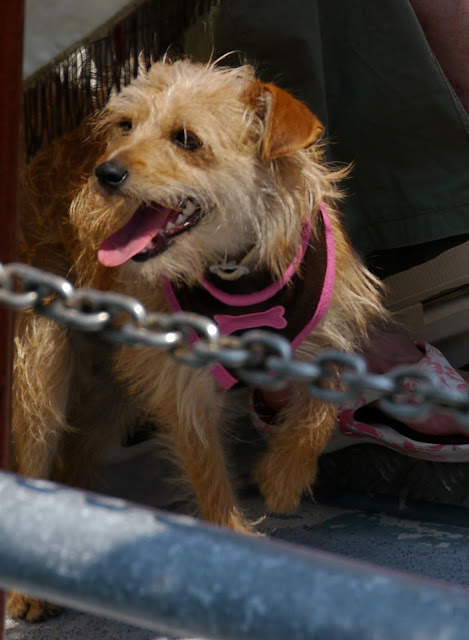 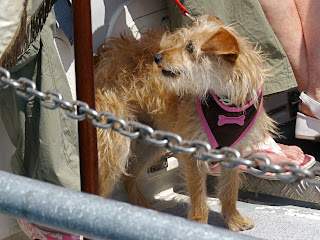 This little dog took part in the Festival of Saint Pierre recently - St. Peter being the patron saint of fishermen. Above and left he is on a boat waiting to go out into the bay where the priest will bless the fisherman who have died at sea.

In the photo below he's waiting - in his owner's arms - for the procession to arrive. You can follow this topic on Menton Daily Photo. 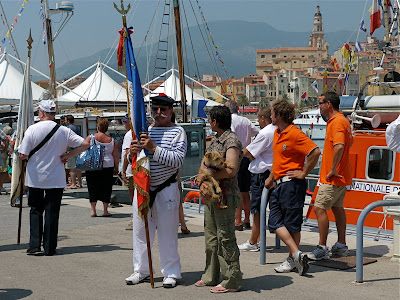 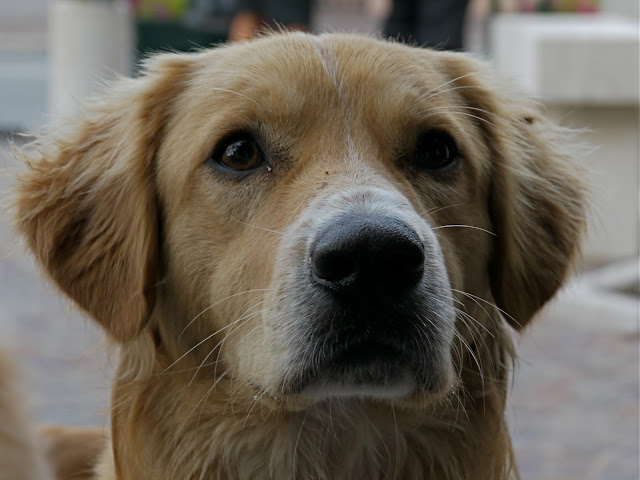 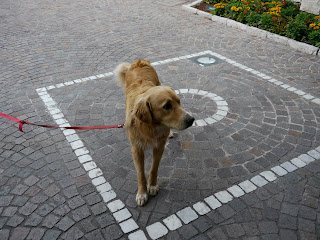 This golden retriever mix was waiting outside a beautiful chapel in Beaulieu-sur-Mer. It's opposite La Reserve de Beaulieu which is one of the Riviera's great hotels (see below). The chapel is now used as an exhibition space and I went along to see a really good exhibition of photographs. This dog was drying off after a swim in the sea. Presumably he belonged to one of the organisers and was more than happy to accept pats from all and sundry. 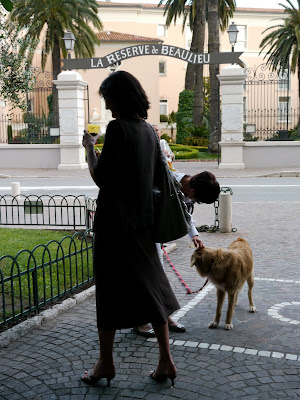 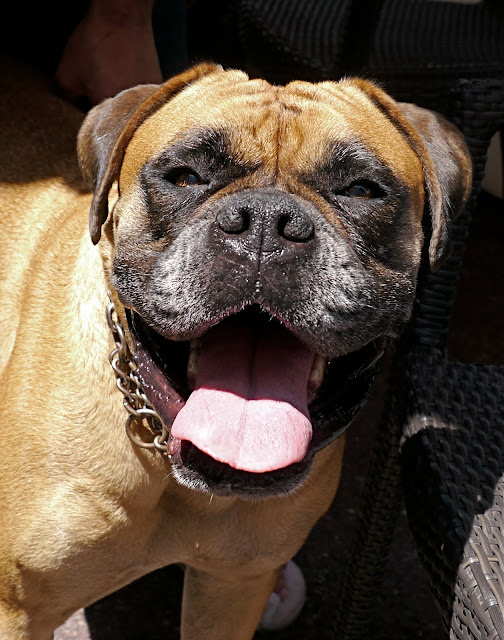 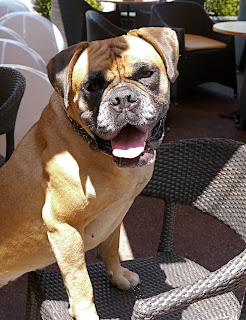 Bassia is hot! So were we all. He was having lunch at Stars n Bars on the port of Monaco - well, actually his owners were...

He sat in the shade with a large plastic bucket of water offered by the management.

Bassia lives in Monaco. He's three and a half years old and he's a mix of a Boxer and a Dogue de Bordeaux and you can clearly see both breeds in him. A sweetie.
Posted by Jilly at Tuesday, July 06, 2010 3 comments 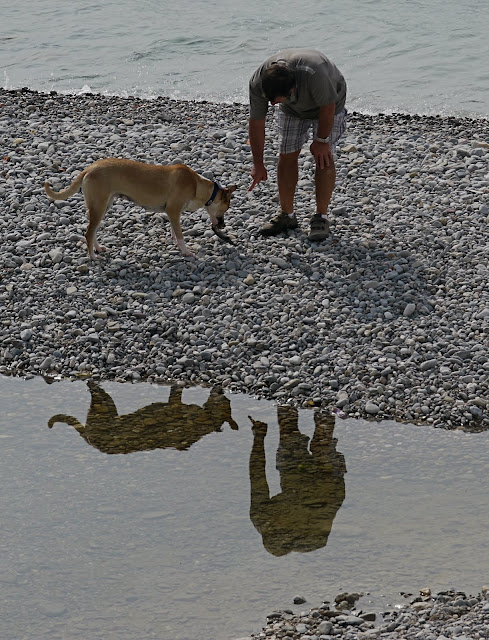 This photo was on Menton Daily Photo the other day (the subject was 'reflections') but I thought it might be of interest to readers of Riviera Dogs if they hadn't seen it.

The dog had picked up the wing of a seabird and his owner is trying to make him drop it. Eventually he succeeded - with difficulty!
Posted by Jilly at Saturday, July 03, 2010 2 comments