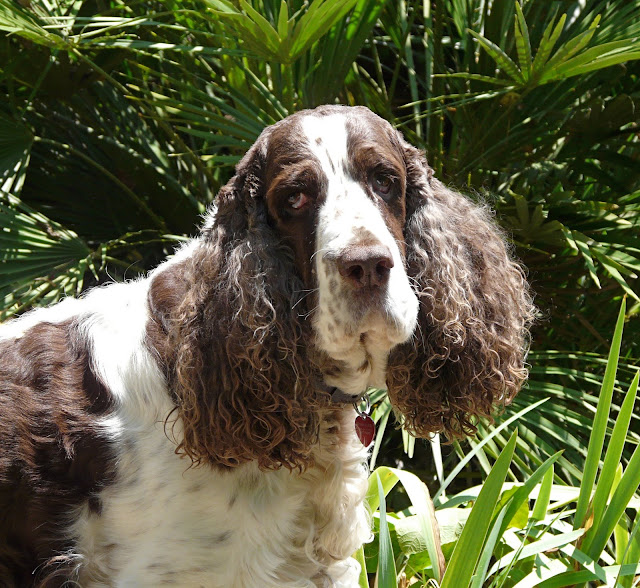 Lily is a beautiful Springer Spaniel who lives just along the coast at Villefranche, which is a town next to Nice. Lily is much travelled dog. Sometimes she lives in Paris and sometimes in London and she even flies on her owner's private plane as if it's something all dogs do.

One time in Paris, when left with her dog carer, she was walking in one of Paris' beautiful gardens, when a firework went off. She took off, scared, and was lost for two days. A nightmare for both owner and carer. They plastered the park with posters and eventually she was found in the hands of an SDF (sans domicile fixe = of no fixed abode) on the end of a piece of rope. Happily, apart from very sore feet and some dehydration, she was OK. Of course she should not have been off her lead but it's easy to say - we do get to trust our dogs but personally I'd never let someone else's dog off lead in public. No way.

Like most spaniels, Lily's passion is a ball or any toy - so long as it's in her mouth.
Posted by Jilly at Sunday, August 09, 2009

She is lovely but looks alot like a cocker spaniel apart from the colouring. She was so lucky to be found again! I have my dogs microchipped just in case x

I agree, even though I trust my beloved dog I love him too much to ever let him off his lead in a public place, especially with fireworks!!! Sometimes I see "shop dogs" who roam free, I get so worried about them, but each to their own :)

I am guilty of letting my bichon off leash, he did chase a moped the last time, he's chipped and usually stays right by me in town.

Lily is beautiful, the most beautiful spaniel I've seen in awhile.

This photo makes me think of Virginia Woolf.