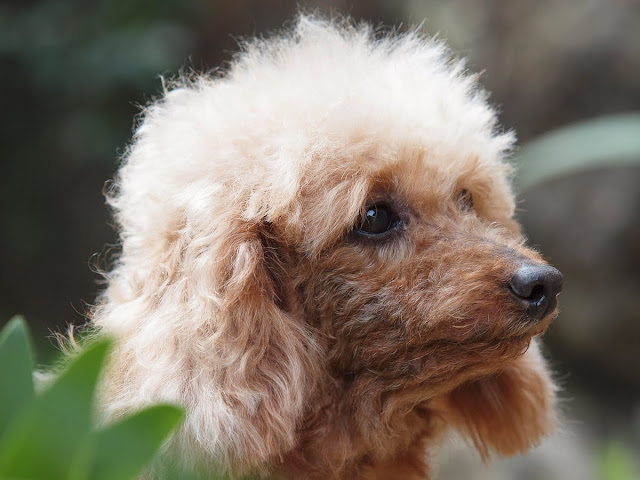 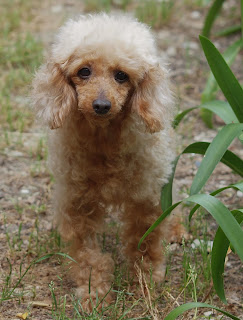 It nearly two and a half month since Fanny was dumped, tied up outside my gate. (click to see how she was then)

Since then she's had an ultrasound to see if she had Cushing's Disease - really awful skin, which she had, is a symptom. The result was negative although she does have a very bad heart - on a scale of 4 being bad, the vet said she is 3. She's on antibiotics, two lots of heart pills, something for her crazy stomach that sounds as if it's in the middle of a rough ocean, special baths every five days and cortisone twice a week to help stop the scratching. The vet wasn't sure she could sterilize her because she didn't know if her heart would take the anaesthetic.

Then she came into season and it went on for over a month. The vet said she'd have to sterilize her as otherwise she'd get pyrometra (pus in the womb) but that she'd use the safest anaesthetic she had. And so Fanny was sterilized, had her teeth cleaned at the same time and is now fully recovered.

She has no upper front teeth between the canines - the vet thinks she probably never did. She looks, in profile as if she has an overshot bite but in fact she is vastly undershot, so there is some deformity there. I've not mentioned it to her, of course...

She's put on half a kilo but to do so eats enough to feed a small labrador. She doesn't seem to get the goodness from food and needs more than a dog her size should.

Amazingly she is growing coat where she has the elephant-like skin on her face and under her chin - not around her rear end but then we don't have to look at that too often.

She's very needy - stuck to me like glue. She isn't crazy about the dogs who come to stay but is having to learn dogs share attention in this house but she's now got used to Beau and Mia - she really didn't like Mia at the beginning.

And she barks... so we are working on that. Barking dogs and me - we don't get along.

And she has a godmother in Monaco - a good friend of mine who has undertaken to pay her vet bills for life - and they've been considerable. Isn't that incredible. Thank you to my dear friend, Sue.

Fanny always has the saddest look in her eyes but now she plays with a toy - brings it to me to throw and and I don't think she'd play if she wasn't happy - or at least as happy as she can be. I often wonder about her life before and why those eyes look so sad... 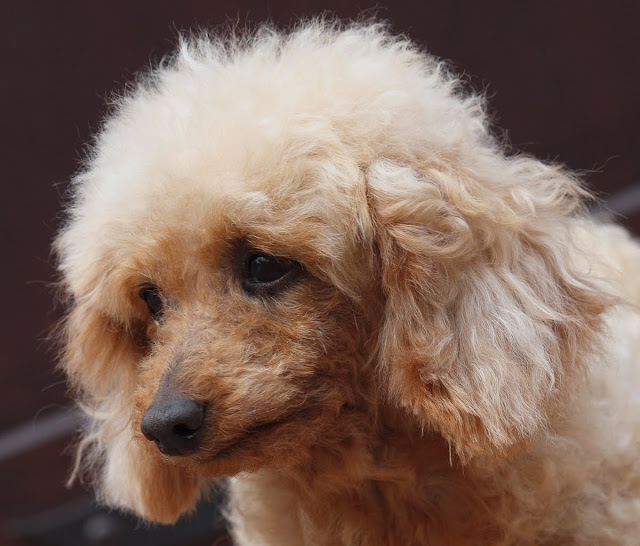 Fanny has come such a long way under your extraordinary care. She is beautiful and wonderful and blessed to have landed outside your door and brilliant to have made her way inside the gate.

Awwww. Fanny is indeed lucky to have found you--and the godmother!

I remember your first post about her. You and Sue are saints.

Reminds me of the kitten that someone put under Julie's garage door with a bowl of milk. Julie cared for the cat for 30 years, and she is allergic to cats and would wake up every morning with welts on her arm because the cat liked to sleep on it.

Thanks for the update. She looks much better.

Another lucky dog to have come your way. It does make you wonder what she has experienced in her life so far. Hopefully she will have some peaceful happy years with you.

Wow, she looks great! She looks quite serene in that first photo. She must have felt so poorly before.

Your friend is an angel to help with the vet bills...and they tend to become horrendous! This little one is lovely, despite the shortcomings you described. Thanks to you for befriending and helping this canine.

What an amazing change from the little bundle of fur we saw all those weeks ago. Those haunted sad eyes. Although as you say, she's a lot happier than perhaps she used to be.
Give her a special hug from Gail and I x