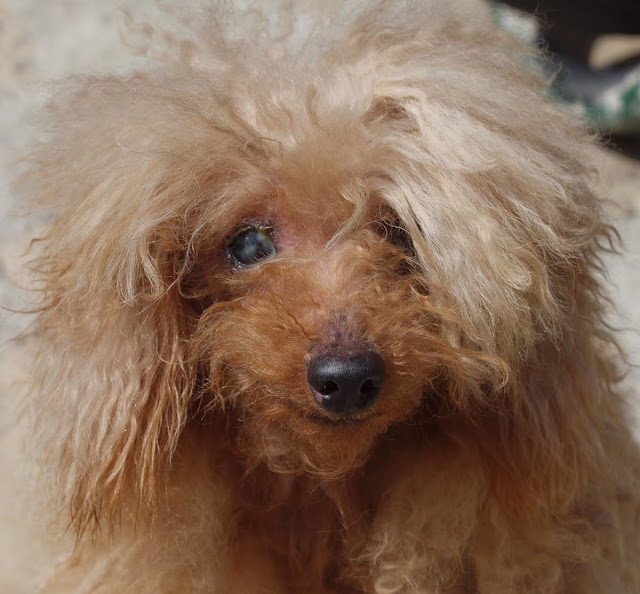 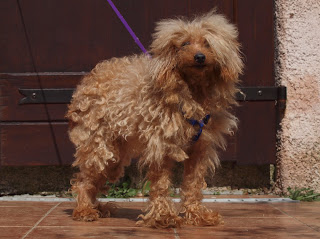 This little dog was tied up outside my gate 4 nights ago - abandoned. At 9.30 that evening I'd let the dogs out and they had gone bonkers with barking. Once I'd quietened them down I could hear a tiny tiny bark just beyond the gate. I called my neighbour and asked if one of her dogs was out and then she told me that a poodle had been tied up outside since around 6 p.m. when she'd got home. My neighbour assumed I had friends visiting and perhaps they had a dog in season and couldn't come in. Then I realised what was going on. I'd had a phone call earlier in the day asking if my place is a refuge for dogs. I said no. The lady said the dog's owner, from Menton, was sick, in hospital and dying and they didn't want his dog! I explained this is not a refuge and they should call the SPA in Monaco but somehow they found me and left her outside the gate anyway.

The next morning we went to the veterinarian - she is about 13 years old, very thin and is now on antibiotics, two different eye drops, one four times a day, one six times a day - one she will need for life as her eyes don't make tears. There's ear medication, and a special bath every five days. She has a heart murmur and filthy teeth which will be cleaned when she has gained condition. Parts of her skin are hard like elephant hide. When I got her home I scissored off all her fur, she's her had first anti-bacterial bath and she is on all the other treatments. Already her eyes are pretty much better, the inflammation has gone from inside her ears, her skin has calmed down - and she is adorable.

She's very neglected but not abused as such. I think her condition is probably the result of an old person just letting her care get out of control. Perhaps I'm being over-generous here as she is a mess. As the vet said, she's been neglected for years.

On the way home from the vet I stopped off in Monaco to have coffee at the Café de Paris with blogging friends from the UK. It was quite funny to see this mess of ungroomed coat and weepy eyes sitting on a chair alongside the immaculately coiffed Monte Carlo dogs. She sat there as if she's done it all her life.

So now we have another dog as part of the Pension Milou family - she really is a very bright little dog, very needy (of course) but very easy. She's absolutely clean and is stuck to me like glue. She also isn't a yappy poodle, thank goodness. My two big hounds, Beau and Mia, don't give kisses so now I'm so lucky and have this little love who does!

Of course, she needed a name and I asked on Facebook - got an enormous number of replies which was so helpful - reading through them all made me realise she reminds me of an old movie star, fallen on hard times. There were many possibilities, Clara Bow, Norma Desmond and so on. I tried several names on her - when I said 'Garbo' for instance, she looked at me terrified and ran back to her bed!

And so she's called Fanny - named for Fanny Brice who was the inspiration for the Broadway show and later the film called Funny Girl. Fancy Brice was also the first person to sing Second Hand Rose when she starred in the Zeigfeld Follies of 1929 - and this little dog is very much a 'second-hand rose.' She seemed to approve of Fanny and ran towards me when I said it.

Dear Jilly,
I'm discovering the story, as I have no facebook. Fanny is a perfect name for her; In a way, I'm glad those people decided to let her on your door. i guess the SPA would have not keep her.. She'll bring you love, as much as you will bring her care and attention, that's all she's needing; poor little baby, she's so lovely!
Be blessed to be there for all those kind dogs!You're a marvellous person!

Jilly, if there's a heaven, there's a special place for you and others who take animals like this into their homes and lives. As you've stated, you'll get back so much more than you've given. The love of a good dog is a wonderful thing. Blessings to you!

Thanks for the kind comments but all us dog people would do the same. And she truly is a wonderfully, easy, kind dog.

Don't know about heaven, Janet - there might be other things to take into consideration...!

A sad story that ends well.
Fanny is lovely.

I haven't been browsing facebook lately so I missed this story. Sad to know what this dog has gone through, but then sometimes the elderly too live the same kind of life in neglect. You are a kind soul to take Fanny in and care for her remaining years. Our Winston also makes few tears and needs eye drops daily.

Jilly, you have a heart of gold. What a lucky pup. I'm sure she will be well coiffed one day! :) You deserve all the puppy kisses for all the good you do. Give Mia a hug from me as well.
V

PS My WV is HOUNDERE! Is that French for hound? HA

Oh, what a sweet face! I only just discovered your blog and I'm so glad to know that Fanny has someone to appreciate her kisses. I enjoyed looking at your dog pictures - of course my dog Joey made me look at the Golden Retrievers. Wonderful blog!

The thought of Fanny sitting at the Cafe de Paris really made my day! Sad to think that at some time she must have been someone's much loved companion but good to know that her last few years will be spent in your tender loving care.

What a great story and Fanny looks like a love. When you shared how proudly she sat while you were having coffee it made me wonder if she was maybe remembering times gone by. If they could only talk.

She's darling. It was so good of you to take her in.

I suspect there is far more to darling Fanny than meets the eye. It was no accident she's come to you. Perhaps you each have something important to give each other. Congratulations to the entire family.

You are such a wonderful person for taking this precious dog into your life.

Fanny certainly was left at a place that would care about her.

Thank you...for loving animals so much...

Although I have a facebook page I never go there so I'd missed your story on facebook. Thanks for telling it here. You are so generous Jilly. I guess the people who left Fanny at your gate knew she would not only get the best care, she would also be loved. Glad she's of the cuddly sort - no doubt you and her will enjoy each other's company. I look forward to meeting her next time I come.

Love the story of her sitting at Café de Paris in Monaco alongside all the well-groomed dogss!!! :-)

Fanny is absolutely adorable. It is good to know that there are people like you around who won't turn away from animals who need help. I have two dogs myself that came to me unexpectedly. I wouldn't be without them.

Very best wishes to both you and Fanny.

how sweet but sad that she's been so neglected... I'm so happy for Fanny that she ended up at your door and that she likes her new name...imagine, after 13 years and you two had never crossed paths before...enjoy your new little friend and I'm going to look for your facebook page so I can keep up with any Fanny updates..