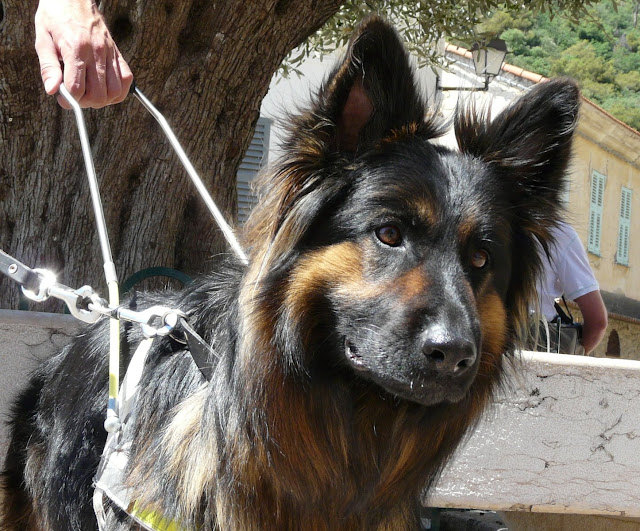 Many of us think of a Guide Dog for the Blind as being a labrador, and indeed they are the most common breed used, but other breeds are Guide Dogs too. Meet a beautiful long-haired German Shepherd Dog called Gill. She is the Guide Dog for her handsome young owner who you see in the smaller photograph. They are from Holland and are sitting here under the olive tree in the Place des Deux Frères, in Roquebrune village.

Doesn't she have a beautiful face and such an intelligent expression? I have so much admiration for Guide Dogs. I used to own a labrador, Flavia, who was a Guide Dog for the Blind until she was six when sadly her owner died. She had several homes after that, until I adopted her at 9 and a half and then she lived with me till she died aged 15. A lovely dog, she was.
Posted by Jilly at Thursday, July 17, 2008

Jilly, that truly is a gorgeous dog! The facial expressions are awesome!

lovely portraits you have here! I just did a post about a guide dog last Saturday in Manhattan's subway over at http://www.longislanddailyphoto.blogspot.com/
What a beautiful face Gill has!

Years ago it seemed that ONLY German Shepherds were guide dogs.

I do not think I have ever seen a shepard as a guide dog here in Australia.
We have the labs and we do have labadooles (lab x with a poodle) for people who are allergic to dog hair. They are very popular.
Gill has a very wise face. He is just lovely!

Brilliant photos, Jilly. What a great pair of friends.

That's a beautiful dog - you've captured a fantastic expression on her face...

Beautiful dog and lovely photo Jilly. Flavia was lucky to have you to adopt her Jilly. Sounds like you have a big heart for lost dogs in the same way that I am about stray cats.