Beau and his poor toe 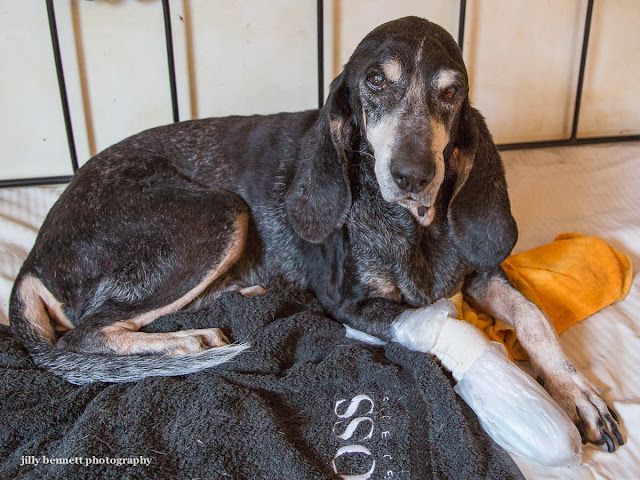 Some of you know Beau, the oldest of my rescue dogs.  No idea how old he is but he's old and so much is wrong with him - he's had four operations on his ears - two eardrums removed, one inner ear - now he has open fistulas that ooze down his neck but that relieves pressure on his ears. He also has really bad seborreah which is greasy and smells awful. He should be bathed every 5 days. I do it as often as I have the energy to push him into the shower, which he hates.

Here he'd yanked a toenail and it had gone septic and had to be removed. Actually this was taken a week or so ago and now I've removed the dressing and it's healing up fine. He's very creaky, doesn't see well but still loves his food and isn't going anywhere yet. He's also a beautiful, kind, wonderful - so wonderful - dog. He's a Bruno de Jura, by the way - which is a Swiss Hunting Dog.
Posted by Jilly at Friday, January 03, 2014

He has such a sad, old face. Glad to hear his toe is better.