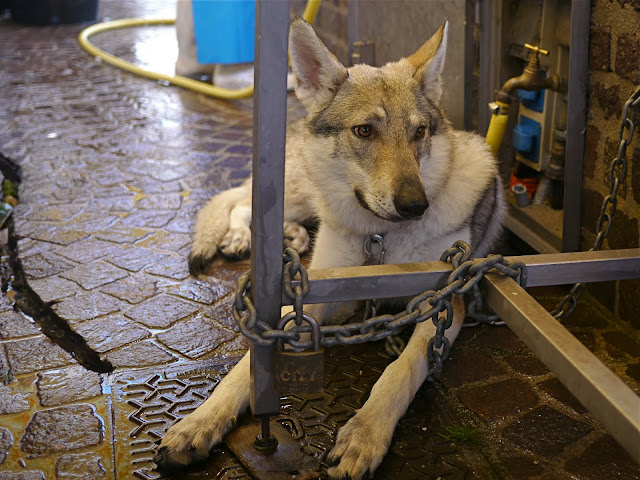 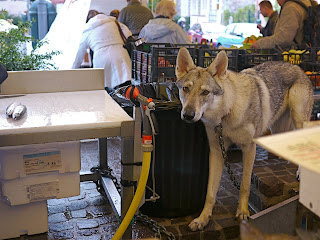 The fishmonger in Carnoles has a new young dog. She's 12 months old and is called Fidgie. He spent most of the time we were talking throwing her heads of fish.

He told me she is a Wolf and he had to wait a long time to get her from a special breeder. He insists she is pure Wolf but to me she looks mostly German Sheepdog Dog with perhaps a bit of Wolf mixed in. He told me she's not an easy breed. He also told me that Wolves only come into season once in their life, hence his long wait for a puppy.

I gather that Wolf hybrids are now classified as Wolfdogs and that would seem to be what Fidgie is and probably what the fishmonger meant, with me misunderstanding his French.
Posted by Jilly at Tuesday, December 14, 2010

Nice looking young wolf dog? looks like a German Shepard mixed with maybe coyote for this dog looks small for a young wolf?
The other night while driving home very late with cold temperatures was a stray dog, I stopped to help rescue this dog -- but when I looked at him/her? I realized it was a coyote, they have been coming down into the city limits more and more looking for food, for all the building on the mountain forced them to hunt elsewhere and cats are a plenty.

Wow! What a neat story! Maybe it does have a little wolf in it. That's a pretty heavy chain...

Judging from that chain, I'd say she is "difficult" or perhaps just being what she was born to do. I can't imagine keeping a wild animal as a pet.

Meanwhile Chez Virginie has a kitty up the Christmas tree!

That chain is too heavy.

I've seen similar looking "dogs" at a world dogshow in Amsterdam many years ago. That one was called Saarlos Wolfhond. I found them still when I Googled today.

Much to heavy chain, hope he gets out of that often....

Fotobloggen, that's really interesting. I know nothing about Wolfdogs as such.

To all who commented on the chain, well I think the actual chain around is neck is lighter than the one fixed to the bench. Certainly it didn't seem to bother her when she jumped around and stood up for the fish. The photo gives an illusion that massive chain is around her neck, which it isn't. Having said that, it's still a heavy chain. You can see the difference if you blow up the photo.

What an awful chain! poor dog