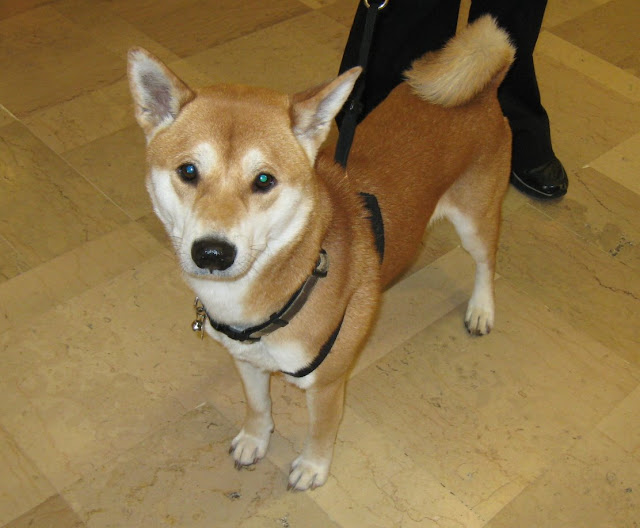 I met this Shiba Inu at Cap 3000, the big shopping centre just outside Nice - beyond the airport. They are originally from Japan, although her owner told me that Honey was bred in the United States. Inu is Japanese for dog. The Shiba Inu is the smallest of the Japanese native breeds of dog and was originally developed for hunting by sight and scent in dense undergrowth. There are more Shiba Inus in Japan than any other breed and it was in 7000 BC that the ancestors of today's Shiba may have accompanied the earliest immigrants to Japan.
Posted by Jilly at Tuesday, November 20, 2007

You rarely see them in Australia too. Mind you, they do have a reputation for having a strong will so the right person should only own them.
Lovley honey colour and the right name for her!

I've been blessed to have two fabulous Shibas in my life -- they are indeed strong willed dogs, but they are smart, intuitive, funny and oh so clean and cat like. Lovely breed -- and Honey is a lovely example of our breed.